A phase 3, multi-center, three-arm, randomized, open-label study was conducted in previously untreated patients with advanced renal cell carcinoma (clear cell and non-clear cell histologies). The objectives were to compare Overall Survival (OS), Progression-Free Survival (PFS), Objective Response Rate (ORR), and safety in patients receiving IFN-α to those receiving TORISEL or TORISEL plus IFN-α. Patients in this study had 3 or more of 6 pre-selected prognostic risk factors (less than one year from time of initial renal cell carcinoma diagnosis to randomization, Karnofsky performance status of 60 or 70, hemoglobin less than the lower limit of normal, corrected calcium of greater than 10 mg/dL, lactate dehydrogenase >1.5 times the upper limit of normal, more than one metastatic organ site). Patients were stratified for prior nephrectomy status within three geographic regions and were randomly assigned (1:1:1) to receive IFN-α alone (n = 207), TORISEL alone (25 mg weekly; n = 209), or the combination arm (n = 210).

The ITT population for this interim analysis included 626 patients. Demographics were comparable between the three treatment arms with regard to age, gender, and race. The mean age of all groups was 59 years (range 23–86). Sixty-nine percent were male and 31% were female. The racial distribution for all groups was 91% White, 4% Black, 2% Asian, and 3% other. Sixty-seven percent of patients had a history of prior nephrectomy.

There was a statistically significant improvement in OS (time from randomization to death) in the TORISEL 25 mg arm compared to IFN-α. The combination of TORISEL 15 mg and IFN-α did not result in a significant increase in OS when compared with IFN-α alone. Figure 1 is a Kaplan-Meier plot of OS in this study. The evaluations of PFS (time from randomization to disease progression or death) and ORR, were based on blinded independent radiologic assessment of tumor response. Efficacy results are summarized in Table 4. 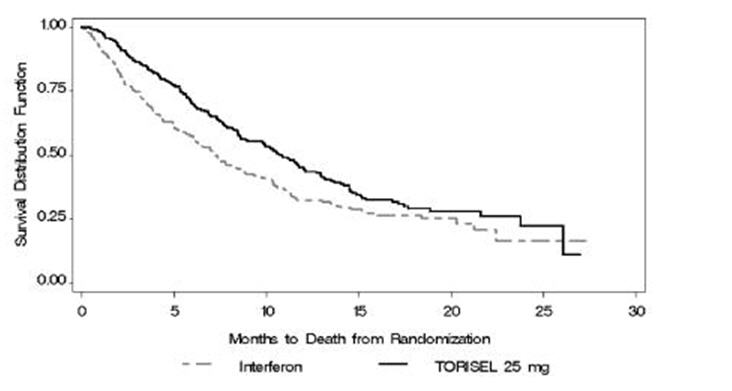