Dofetilide shows Vaughan Williams Class III antiarrhythmic activity. The mechanism of action is blockade of the cardiac ion channel carrying the rapid component of the delayed rectifier potassium current, IKr. At concentrations covering several orders of magnitude, dofetilide blocks only IKr with no relevant block of the other repolarizing potassium currents (e.g., IKs, IK1). At clinically relevant concentrations, dofetilide has no effect on sodium channels (associated with Class I effect), adrenergic alpha-receptors, or adrenergic beta-receptors.

Dofetilide increases the monophasic action potential duration in a predictable, concentration-dependent manner, primarily due to delayed repolarization. This effect, and the related increase in effective refractory period, is observed in the atria and ventricles in both resting and paced electrophysiology studies. The increase in QT interval observed on the surface ECG is a result of prolongation of both effective and functional refractory periods in the His-Purkinje system and the ventricles.

Dofetilide did not influence cardiac conduction velocity and sinus node function in a variety of studies in patients with or without structural heart disease. This is consistent with a lack of effect of dofetilide on the PR interval and QRS width in patients with pre-existing heart block and/or sick sinus syndrome.

Approximately 80% of a single dose of dofetilide is excreted in urine, of which approximately 80% is excreted as unchanged dofetilide with the remaining 20% consisting of inactive or minimally active metabolites. Renal elimination involves both glomerular filtration and active tubular secretion (via the cation transport system, a process that can be inhibited by cimetidine, trimethoprim, prochlorperazine, megestrol, ketoconazole and dolutegravir). In vitro studies with human liver microsomes show that dofetilide can be metabolized by CYP3A4, but it has a low affinity for this isoenzyme. Metabolites are formed by N-dealkylation and N-oxidation. There are no quantifiable metabolites circulating in plasma, but 5 metabolites have been identified in urine.

Population pharmacokinetic analyses indicate that the plasma concentration of dofetilide in patients with supraventricular and ventricular arrhythmias, ischemic heart disease, or congestive heart failure are similar to those of healthy volunteers, after adjusting for renal function.

After correction for renal function, clearance of dofetilide is not related to age.

A population pharmacokinetic analysis showed that women have approximately 12–18% lower dofetilide oral clearances than men (14–22% greater plasma dofetilide levels), after correction for weight and creatinine clearance. In females, as in males, renal function was the single most important factor influencing dofetilide clearance. In normal female volunteers, hormone replacement therapy (a combination of conjugated estrogens and medroxyprogesterone) did not increase dofetilide exposure.

Dose-Response and Concentration Response for Increase in QT Interval

Increase in QT interval is directly related to dofetilide dose and plasma concentration. Figure 1 shows that the relationship in normal volunteers between dofetilide plasma concentrations and change in QTc is linear, with a positive slope of approximately 15–25 msec/(ng/mL) after the first dose and approximately 10–15 msec/(ng/mL) at Day 23 (reflecting a steady state of dosing). A linear relationship between mean QTc increase and dofetilide dose was also seen in patients with renal impairment, in patients with ischemic heart disease, and in patients with supraventricular and ventricular arrhythmias. 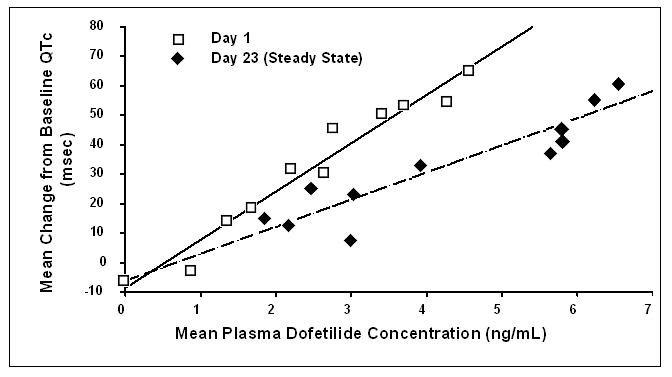 Note: The range of dofetilide plasma concentrations achieved with the 500 mcg BID dose adjusted for creatinine clearance is 1–3.5 ng/mL.

The relationship between dose, efficacy, and the increase in QTc from baseline at steady state for the two randomized, placebo-controlled studies (described further below) is shown in Figure 2. The studies examined the effectiveness of TIKOSYN in conversion to sinus rhythm and maintenance of normal sinus rhythm after conversion in patients with atrial fibrillation/flutter of >1 week duration. As shown, both the probability of a patient's remaining in sinus rhythm at six months and the change in QTc from baseline at steady state of dosing increased in an approximately linear fashion with increasing dose of TIKOSYN. Note that in these studies, doses were modified by results of creatinine clearance measurement and in-hospital QTc prolongation. 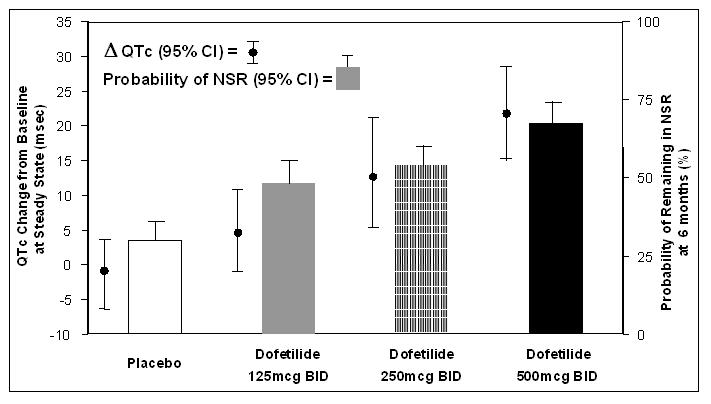