In clinical trials of 155 pediatric patients, 2.6% reported symptoms suggestive of drug sensitivity, such as shortness of breath, chest pain, urticaria, rash, and pruritus.

In these 155 patients treated for an average of 41 months and as long as 80 months (6.7 years), adverse events most frequently reported (>3% of patients) consisted largely of episodes occurring during the first 6 weeks of treatment as a result of the transient stimulatory action of nafarelin upon the pituitary-gonadal axis:

Hot flashes, common in adult women treated for endometriosis, occurred in only 3% of treated children and were transient. Other adverse events thought to be drug-related, and occurring in >3% of patients were rhinitis (5%) and white or brownish vaginal discharge (3%). Approximately 3% of patients withdrew from clinical trials due to adverse events.

In one male patient with concomitant congenital adrenal hyperplasia, and who had discontinued treatment 8 months previously to resume puberty, adrenal rest tumors were found in the left testis. Relationship to SYNAREL is unlikely.

Psychiatric adverse events: Emotional lability, such as crying, irritability, impatience, anger, and aggression has been observed with GnRH agonists [see Warnings]; Depression, including rare reports of suicidal ideation and attempt, has been reported for GnRH agonists in children treated for central precocious puberty. Many, but not all, of these patients had a history of psychiatric illness or other comorbidities with an increased risk of depression.

As would be expected with a drug which lowers serum estradiol levels, the most frequently reported adverse reactions were those related to hypoestrogenism.

In controlled studies comparing SYNAREL (400 µg/day) and danazol (600 or 800 mg/day), adverse reactions most frequently reported and thought to be drug-related are shown in the figure below: 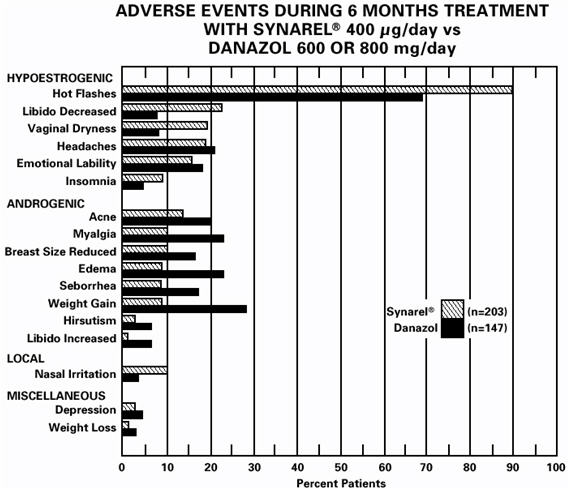 After six months of treatment with SYNAREL, vertebral trabecular bone density and total vertebral bone mass, measured by quantitative computed tomography (QCT), decreased by an average of 8.7% and 4.3%, respectively, compared to pretreatment levels. There was partial recovery of bone density in the post-treatment period; the average trabecular bone density and total bone mass were 4.9% and 3.3% less than the pretreatment levels, respectively. Total vertebral bone mass, measured by dual photon absorptiometry (DPA), decreased by a mean of 5.9% at the end of treatment.

After six months treatment with SYNAREL, bone mass as measured by dual x-ray bone densitometry (DEXA), decreased 3.2%. Mean total vertebral mass, re-examined by DEXA six months after completion of treatment, was 1.4% below pretreatment. There was little, if any, decrease in the mineral content in compact bone of the distal radius and second metacarpal. Use of SYNAREL for longer than the recommended six months or in the presence of other known risk factors for decreased bone mineral content may cause additional bone loss.

Changes in Laboratory Values During Treatment

During clinical trials with SYNAREL, regular laboratory monitoring revealed that SGOT and SGPT levels were more than twice the upper limit of normal in only one patient each. There was no other clinical or laboratory evidence of abnormal liver function and levels returned to normal in both patients after treatment was stopped.

Of those patients whose pretreatment cholesterol values were below 250 mg/dL, 6% in the group treated with SYNAREL and 18% in the danazol group, had post-treatment values above 250 mg/dL.

In comparative studies, the following changes were seen in approximately 10% to 15% of patients. Treatment with SYNAREL was associated with elevations of plasma phosphorus and eosinophil counts, and decreases in serum calcium and WBC counts. Danazol therapy was associated with an increase of hematocrit and WBC.

Cardiovascular adverse events: Cases of serious venous and arterial thromboembolism have been reported, including deep vein thrombosis, pulmonary embolism, myocardial infarction, stroke, and transient ischemic attack. Although a temporal relationship was reported in some cases, most cases were confounded by risk factors or concomitant medication use. It is unknown if there is a causal association between the use of GnRH analogs and these events.

Reproductive system adverse events: Cases of ovarian hyperstimulation syndrome have been reported with Synarel monotherapy when used for Assisted Reproductive Technology which is not an approved indication.