Rocuronium bromide is a nondepolarizing neuromuscular blocking agent with a rapid to intermediate onset depending on dose and intermediate duration. It acts by competing for cholinergic receptors at the motor end-plate. This action is antagonized by acetylcholinesterase inhibitors, such as neostigmine and edrophonium.

The ED95 (dose required to produce 95% suppression of the first [T1] mechanomyographic [MMG] response of the adductor pollicis muscle [thumb] to indirect supramaximal train-of-four stimulation of the ulnar nerve) during opioid/nitrous oxide/oxygen anesthesia is approximately 0.3 mg/kg. Patient variability around the ED95 dose suggests that 50% of patients will exhibit T1 depression of 91% to 97%.

Table 4 presents intubating conditions in patients with intubation initiated at 60 to 70 seconds.

Table 6 presents the time to onset and clinical duration for the initial dose of  Rocuronium Bromide Injection under sevoflurane (induction) and isoflurane/nitrous oxide (maintenance) anesthesia in pediatric patients.

The time to 80% or greater block and clinical duration as a function of dose are presented in Figures 1 and 2. 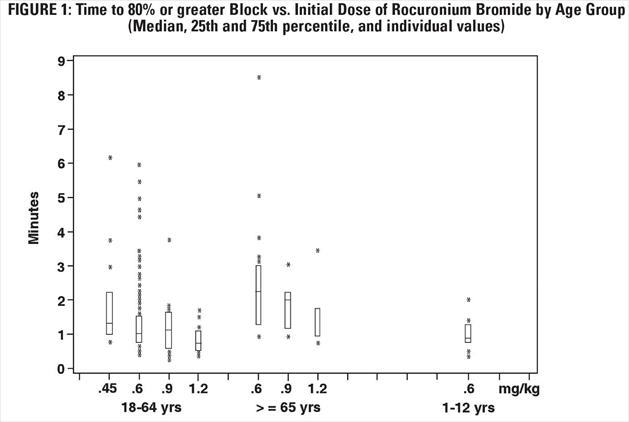 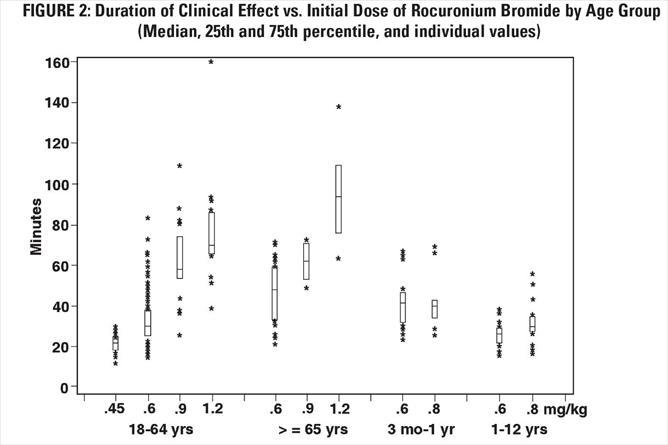 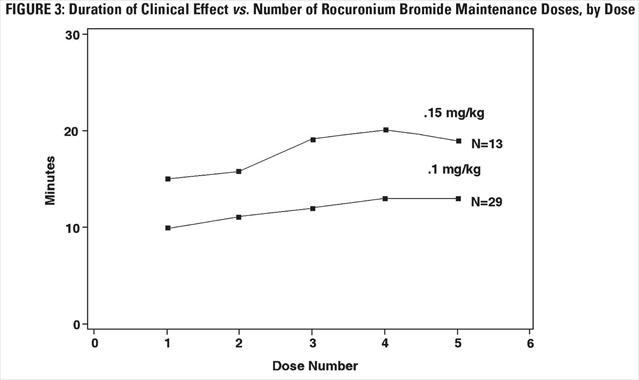 Once spontaneous recovery has reached 25% of control T1, the neuromuscular block produced by rocuronium bromide is readily reversed with anticholinesterase agents, e.g., edrophonium or neostigmine.

There were no reports of less than satisfactory clinical recovery of neuromuscular function.

The neuromuscular blocking action of rocuronium bromide may be enhanced in the presence of potent inhalation anesthetics [see Drug Interactions (7.3)].

There were no dose-related effects on the incidence of changes from baseline (30% or greater) in mean arterial blood pressure (MAP) or heart rate associated with rocuronium bromide administration over the dose range of 0.12 to 1.2 mg/kg (4 x ED95) within 5 minutes after rocuronium bromide administration and prior to intubation. Increases or decreases in MAP were observed in 2% to 5% of geriatric and other adult patients, and in about 1% of pediatric patients. Heart rate changes (30% or greater) occurred in 0% to 2% of geriatric and other adult patients. Tachycardia (30% or greater) occurred in 12 of 127 pediatric patients. Most of the pediatric patients developing tachycardia were from a single study where the patients were anesthetized with halothane and who did not receive atropine for induction [see Clinical Studies (14.3)]. In US studies, laryngoscopy and tracheal intubation following rocuronium bromide administration were accompanied by transient tachycardia (30% or greater increases) in about one-third of adult patients under opioid/nitrous oxide/oxygen anesthesia. Animal studies have indicated that the ratio of vagal:neuromuscular block following rocuronium bromide administration is less than vecuronium but greater than pancuronium. The tachycardia observed in some patients may result from this vagal blocking activity.

In studies of histamine release, clinically significant concentrations of plasma histamine occurred in 1 of 88 patients. Clinical signs of histamine release (flushing, rash, or bronchospasm) associated with the administration of rocuronium bromide were assessed in clinical trials and reported in 9 of 1137 (0.8%) patients.

In an effort to maximize the information gathered in the in vivo pharmacokinetic studies, the data from the studies was used to develop population estimates of the parameters for the subpopulations represented (e.g., geriatric, pediatric, renal, and hepatic impairment). These population-based estimates and a measure of the estimate variability are contained in the following section.

Following intravenous administration of rocuronium bromide, plasma levels of rocuronium follow a three-compartment open model. The rapid distribution half-life is 1 to 2 minutes and the slower distribution half-life is 14 to 18 minutes. Rocuronium is approximately 30% bound to human plasma proteins. In geriatric and other adult surgical patients undergoing either opioid/nitrous oxide/oxygen or inhalational anesthesia, the observed pharmacokinetic profile was essentially unchanged [see Dosage and Administration (2.6)].

In general, studies with normal adult subjects did not reveal any differences in the pharmacokinetics of rocuronium due to gender.

Studies of distribution, metabolism, and excretion in cats and dogs indicate that rocuronium is eliminated primarily by the liver. The rocuronium analog 17-desacetyl-rocuronium, a metabolite, has been rarely observed in the plasma or urine of humans administered single doses of 0.5 to 1 mg/kg with or without a subsequent infusion (for up to 12 hr) of rocuronium. In the cat, 17-desacetyl-rocuronium has approximately one-twentieth the neuromuscular blocking potency of rocuronium. The effects of renal failure and hepatic disease on the pharmacokinetics and pharmacodynamics of rocuronium in humans are consistent with these findings.

In general, patients undergoing cadaver kidney transplant have a small reduction in clearance which is offset pharmacokinetically by a corresponding increase in volume, such that the net effect is an unchanged plasma half-life. Patients with demonstrated liver cirrhosis have a marked increase in their volume of distribution resulting in a plasma half-life approximately twice that of patients with normal hepatic function. Table 8 shows the pharmacokinetic parameters in subjects with either impaired renal or hepatic function.

The net result of these findings is that subjects with renal failure have clinical durations that are similar to but somewhat more variable than the duration that one would expect in subjects with normal renal function. Hepatically impaired patients, due to the large increase in volume, may demonstrate clinical durations approaching 1.5 times that of subjects with normal hepatic function. In both populations the clinician should individualize the dose to the needs of the patient [see Dosage and Administration (2.6)].

Tissue redistribution accounts for most (about 80%) of the initial amount of rocuronium administered. As tissue compartments fill with continued dosing (4 to 8 hours), less drug is redistributed away from the site of action and, for an infusion-only dose, the rate to maintain neuromuscular blockade falls to about 20% of the initial infusion rate. The use of a loading dose and a smaller infusion rate reduces the need for adjustment of dose.

Under halothane anesthesia, the clinical duration of effects of rocuronium bromide did not vary with age in patients 4 months to 8 years of age. The terminal half-life and other pharmacokinetic parameters of rocuronium in these pediatric patients are presented in Table 9.

Pharmacokinetics of rocuronium bromide were evaluated using a population analysis of the pooled pharmacokinetic datasets from 2 trials under sevoflurane (induction) and isoflurane/nitrous oxide (maintenance) anesthesia. All pharmacokinetic parameters were found to be linearly proportional to body weight. In patients under the age of 18 years clearance (CL) and volume of distribution (Vss) increase with bodyweight (kg) and age (years). As a result the terminal half-life of rocuronium bromide decreases with increasing age from 1.1 hour to 0.7-0.8 hour. Table 10 presents the pharmacokinetic parameters in the different age groups in the studies with sevoflurane (induction) and isoflurane/nitrous oxide (maintenance) anesthesia.