The tables below summarize the results of the primary efficacy analyses from these trials. Rapamune Oral Solution, at doses of 2 mg/day and 5 mg/day, significantly reduced the incidence of efficacy failure (statistically significant at the < 0.025 level; nominal significance level adjusted for multiple [2] dose comparisons) at 6 months following transplantation compared with both azathioprine and placebo.

The reduction in the incidence of first biopsy-confirmed acute rejection episodes in patients treated with Rapamune compared with the control groups included a reduction in all grades of rejection.

Mean glomerular filtration rates (GFR) post-transplant were calculated by using the Nankivell equation at 12 and 24 months for Study 1, and 12 and 36 months for Study 2. Mean GFR was lower in patients treated with cyclosporine and Rapamune Oral Solution compared with those treated with cyclosporine and the respective azathioprine or placebo control.

Within each treatment group in Studies 1 and 2, mean GFR at one-year post-transplant was lower in patients who experienced at least one episode of biopsy-proven acute rejection, compared with those who did not.

Renal function should be monitored, and appropriate adjustment of the immunosuppressive regimen should be considered in patients with elevated or increasing serum creatinine levels [see Warnings and Precautions (5.8)].

The safety and efficacy of Rapamune Oral Solution and Rapamune Tablets for the prevention of organ rejection following renal transplantation were demonstrated to be clinically equivalent in a randomized, multicenter, controlled trial [see Clinical Pharmacology (12.3)].

The safety and efficacy of Rapamune as a maintenance regimen were assessed following cyclosporine withdrawal at 3 to 4 months after renal transplantation. Study 3 was a randomized, multicenter, controlled trial conducted at 57 centers in Australia, Canada, and Europe. Five hundred twenty-five (525) patients were enrolled. All patients in this study received the tablet formulation. This study compared patients who were administered Rapamune, cyclosporine, and corticosteroids continuously with patients who received this same standardized therapy for the first 3 months after transplantation (pre-randomization period) followed by the withdrawal of cyclosporine. During cyclosporine withdrawal, the Rapamune dosages were adjusted to achieve targeted sirolimus whole blood trough concentration ranges (16 to 24 ng/mL until month 12, then 12 to 20 ng/mL thereafter, expressed as chromatographic assay values). At 3 months, 430 patients were equally randomized to either continue Rapamune with cyclosporine therapy or to receive Rapamune as a maintenance regimen following cyclosporine withdrawal.

Although the initial protocol was designed for 36 months, there was a subsequent amendment to extend this study. The results for the cyclosporine withdrawal group at months 48 and 60 were consistent with the results at month 36. Fifty-two percent (112/215) of the patients in the Rapamune with cyclosporine withdrawal group remained on therapy to month 60 and showed sustained GFR.

Rapamune was studied in a one-year, clinical trial in high risk patients (Study 4) who were defined as Black transplant recipients and/or repeat renal transplant recipients who lost a previous allograft for immunologic reasons and/or patients with high panel-reactive antibodies (PRA; peak PRA level >80%). Patients received concentration-controlled sirolimus and cyclosporine (MODIFIED), and corticosteroids per local practice. The Rapamune dose was adjusted to achieve target whole blood trough sirolimus concentrations of 10–15 ng/mL (chromatographic method) throughout the 12-month study period. The cyclosporine dose was adjusted to achieve target whole blood trough concentrations of 200–300 ng/mL through week 2, 150–200 ng/mL from week 2 to week 26, and 100–150 ng/mL from week 26 to week 52 [see Clinical Pharmacology (12.3)] for the observed trough concentrations ranges. Antibody induction was allowed per protocol as prospectively defined at each transplant center, and was used in 88.4% of patients. The study was conducted at 35 centers in the United States. A total of 224 patients received a transplant and at least one dose of sirolimus and cyclosporine and was comprised of 77.2% Black patients, 24.1% repeat renal transplant recipients, and 13.5% patients with high PRA. Efficacy was assessed with the following endpoints, measured at 12 months: efficacy failure (defined as the first occurrence of biopsy-confirmed acute rejection, graft loss, or death), first occurrence of graft loss or death, and renal function as measured by the calculated GFR using the Nankivell formula. The table below summarizes the result of these endpoints.

Conversion from calcineurin inhibitors (CNI) to Rapamune was assessed in maintenance renal transplant patients 6 months to 10 years post-transplant (Study 5). This study was a randomized, multicenter, controlled trial conducted at 111 centers globally, including US and Europe, and was intended to show that renal function was improved by conversion from CNI to Rapamune. Eight hundred thirty (830) patients were enrolled and stratified by baseline calculated glomerular filtration rate (GFR, 20–40 mL/min versus greater than 40 mL/min). In this trial there was no benefit associated with conversion with regard to improvement in renal function and a greater incidence of proteinuria in the Rapamune conversion arm. In addition, enrollment of patients with baseline calculated GFR less than 40 mL/min was discontinued due to a higher rate of serious adverse events, including pneumonia, acute rejection, graft loss and death [see Adverse Reactions (6.4)].

This study compared renal transplant patients (6–120 months after transplantation) who were converted from calcineurin inhibitors to Rapamune, with patients who continued to receive calcineurin inhibitors. Concomitant immunosuppressive medications included mycophenolate mofetil (MMF), azathioprine (AZA), and corticosteroids. Rapamune was initiated with a single loading dose of 12–20 mg, after which dosing was adjusted to achieve a target sirolimus whole blood trough concentration of 8–20 ng/mL (chromatographic method). The efficacy endpoint was calculated GFR at 12 months post-randomization. Additional endpoints included biopsy-confirmed acute rejection, graft loss, and death. Findings in the patient stratum with baseline calculated GFR greater than 40 mL/min (Rapamune conversion, n = 497; CNI continuation, n = 246) are summarized below. There was no clinically or statistically significant improvement in Nankivell GFR compared to baseline.

The rates of acute rejection, graft loss, and death were similar at 1 and 2 years. Treatment-emergent adverse events occurred more frequently during the first 6 months after Rapamune conversion. The rates of pneumonia were significantly higher for the sirolimus conversion group.

The above information should be taken into account when considering conversion from calcineurin inhibitors to Rapamune in stable renal transplant patients due to the lack of evidence showing that renal function improves following conversion, and the finding of a greater increment in urinary protein excretion, and an increased incidence of treatment-emergent nephrotic range proteinuria following conversion to Rapamune. This was particularly true among patients with existing abnormal urinary protein excretion prior to conversion.

Conversion from a CNI-based regimen to a Rapamune-based regimen was assessed in stable liver transplant patients 6–144 months post-transplant. The clinical study was a 2:1 randomized, multi-center, controlled trial conducted at 82 centers globally, including the US and Europe, and was intended to show that renal function was improved by conversion from a CNI to Rapamune without adversely impacting efficacy or safety. A total of 607 patients were enrolled.

Rapamune was evaluated in a 36-month, open-label, randomized, controlled clinical trial at 14 North American centers in pediatric (aged 3 to < 18 years) renal transplant patients considered to be at high-immunologic risk for developing chronic allograft nephropathy, defined as a history of one or more acute allograft rejection episodes and/or the presence of chronic allograft nephropathy on a renal biopsy. Seventy-eight (78) subjects were randomized in a 2:1 ratio to Rapamune (sirolimus target concentrations of 5 to 15 ng/mL, by chromatographic assay, n = 53) in combination with a calcineurin inhibitor and corticosteroids or to continue calcineurin-inhibitor-based immunosuppressive therapy (n = 25). The primary endpoint of the study was efficacy failure as defined by the first occurrence of biopsy-confirmed acute rejection, graft loss, or death, and the trial was designed to show superiority of Rapamune added to a calcineurin-inhibitor-based immunosuppressive regimen compared to a calcineurin-inhibitor-based regimen. The cumulative incidence of efficacy failure up to 36 months was 45.3% in the Rapamune group compared to 44.0% in the control group, and did not demonstrate superiority. There was one death in each group. The use of Rapamune in combination with calcineurin inhibitors and corticosteroids was associated with an increased risk of deterioration of renal function, serum lipid abnormalities (including, but not limited to, increased serum triglycerides and cholesterol), and urinary tract infections [see Warnings and Precautions (5.8)]. This study does not support the addition of Rapamune to calcineurin-inhibitor-based immunosuppressive therapy in this subpopulation of pediatric renal transplant patients.

The safety and efficacy of Rapamune for treatment of lymphangioleiomyomatosis (LAM) were assessed in a randomized, double-blind, multicenter, controlled trial. This study compared Rapamune (dose-adjusted to maintain blood trough concentrations between 5–15 ng/mL) with placebo for a 12-month treatment period, followed by a 12-month observation period. Eighty-nine (89) patients were enrolled; 43 patients were randomized to receive placebo and 46 patients to receive Rapamune. The primary endpoint was the difference between the groups in the rate of change (slope) per month in forced expiratory volume in 1 second (FEV1). During the treatment period, the FEV1 slope was -12±2 mL per month in the placebo group and 1±2 mL per month in the Rapamune group (treatment difference = 13 mL (95% CI: 7, 18). The absolute between-group difference in the mean change in FEV1 during the 12-month treatment period was 153 mL, or approximately 11% of the mean FEV1 at enrollment. Similar improvements were seen for forced vital capacity (FVC). After discontinuation of Rapamune, the decline in lung function resumed in the Rapamune group and paralleled that in the placebo group (see Figure 1).

FIGURE 1: CHANGE IN FORCED EXPIRATORY VOLUME IN 1 SECOND (FEV1) DURING THE TREATMENT AND OBSERVATION PHASES OF THE STUDY IN LAM PATIENTS 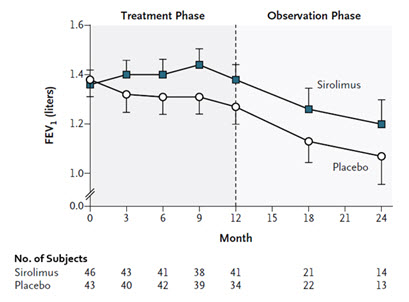 The rate of change over 12 months of vascular endothelial growth factor-D (VEGF-D), a lymphangiogenic growth factor which has been shown to be elevated in patients with LAM, was significantly different in the Rapamune-treated group (-88.0 ± 16.6 pg/mL/month) compared to placebo (-2.42 ± 17.2 pg/mL/month) with a treatment difference of -86 pg/mL/month (95% CI: -133, -39). The absolute between-group difference in the mean change in VEGF-D during the 12-month treatment period was -1017.2, or approximately 50% of the mean VEGF-D at enrollment.