Propofol is an intravenous general anesthetic and sedation drug for use in the induction and maintenance of anesthesia or sedation. Intravenous injection of a therapeutic dose of propofol induces anesthesia, with minimal excitation, usually within 40 seconds from the start of injection (the time for one arm-brain circulation). As with other rapidly acting intravenous anesthetic agents, the half-time of the blood-brain equilibration is approximately 1 minute to 3 minutes, accounting for the rate of induction of anesthesia. The mechanism of action, like all general anesthetics, is poorly understood. However, propofol is thought to produce its sedative/anesthetic effects by the positive modulation of the inhibitory function of the neurotransmitter GABA through the ligand-gated GABAA receptors.

Pharmacodynamic properties of propofol are dependent upon the therapeutic blood propofol concentrations. Steady-state propofol blood concentrations are generally proportional to infusion rates. Undesirable side effects, such as cardiorespiratory depression, are likely to occur at higher blood concentrations which result from bolus dosing or rapid increases in infusion rates. An adequate interval (3 minutes to 5 minutes) must be allowed between dose adjustments in order to assess clinical effects.

The hemodynamic effects of propofol injectable emulsion during induction of anesthesia vary. If spontaneous ventilation is maintained, the major cardiovascular effect is arterial hypotension (sometimes greater than a 30% decrease) with little or no change in heart rate and no appreciable decrease in cardiac output. If ventilation is assisted or controlled (positive pressure ventilation), there is an increase in the incidence and the degree of depression of cardiac output. Addition of an opioid, used as a premedicant, further decreases cardiac output and respiratory drive.

If anesthesia is continued by infusion of propofol injectable emulsion, the stimulation of endotracheal intubation and surgery may return arterial pressure towards normal. However, cardiac output may remain depressed. Comparative clinical studies have shown that the hemodynamic effects of propofol injectable emulsion during induction of anesthesia are generally more pronounced than with other intravenous (IV) induction agents.

During maintenance of general anesthesia, propofol injectable emulsion causes a decrease in spontaneous minute ventilation usually associated with an increase in carbon dioxide tension which may be marked depending upon the rate of administration and concurrent use of other medications (e.g., opioids, sedatives, etc.).

During monitored anesthesia care (MAC) sedation, attention must be given to the cardiorespiratory effects of propofol injectable emulsion. Hypotension, oxyhemoglobin desaturation, apnea, and airway obstruction can occur, especially following a rapid bolus of propofol injectable emulsion. During initiation of MAC sedation, slow infusion or slow injection techniques are preferable over rapid bolus administration. During maintenance of MAC sedation, a variable rate infusion is preferable over intermittent bolus administration in order to minimize undesirable cardiorespiratory effects. In the elderly, debilitated, or American Society of Anesthesiologists Physical Status (ASA-PS) III or IV patients, rapid (single or repeated) bolus dose administration should not be used for MAC sedation (see WARNINGS).

Clinical studies indicate that propofol injectable emulsion does not suppress the adrenal response to ACTH.

Animal studies and limited experience in susceptible patients have not indicated any propensity of propofol injectable emulsion to induce malignant hyperthermia.

Hemosiderin deposits have been observed in the livers of dogs receiving DIPRIVAN containing 0.005% disodium edetate over a four-week period; the clinical significance of this is unknown.

Following an IV bolus dose, there is rapid equilibration between the plasma and the brain, accounting for the rapid onset of anesthesia. Plasma levels initially decline rapidly as a result of both distribution and metabolic clearance. Distribution accounts for about half of this decline following a bolus of propofol.

Discontinuation of the recommended doses of propofol injectable emulsion after the maintenance of anesthesia for approximately one hour, or for sedation in the ICU for one day, results in a prompt decrease in blood propofol concentrations and rapid awakening. Longer infusions (10 days of ICU sedation) result in accumulation of significant tissue stores of propofol, such that the reduction in circulating propofol is slowed and the time to awakening is increased.

By daily titration of propofol injectable emulsion dosage to achieve only the minimum effective therapeutic concentration, rapid awakening within 10 minutes to 15 minutes can occur even after long-term administration. If, however, higher than necessary infusion levels have been maintained for a long time, propofol redistribution from fat and muscle to the plasma can be significant and slow recovery. 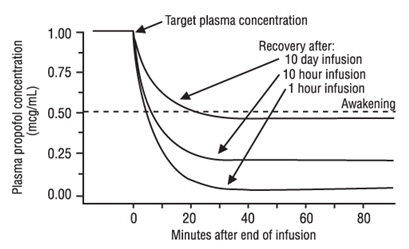 The large contribution of distribution (about 50%) to the fall of propofol plasma levels following brief infusions means that after very long infusions a reduction in the infusion rate is appropriate by as much as half the initial infusion rate in order to maintain a constant plasma level. Therefore, failure to reduce the infusion rate in patients receiving propofol injectable emulsion for extended periods may result in excessively high blood concentrations of the drug. Thus, titration to clinical response and daily evaluation of sedation levels are important during use of propofol injectable emulsion infusion for ICU sedation.

Propofol clearance ranges from 23 mL/kg/min to 50 mL/kg/min (1.6 L/min to 3.4 L/min in 70 kg adults). It is chiefly eliminated by hepatic conjugation to inactive metabolites which are excreted by the kidney. A glucuronide conjugate accounts for about 50% of the administered dose. Propofol has a steady-state volume of distribution (10-day infusion) approaching 60 L/kg in healthy adults. A difference in pharmacokinetics due to sex has not been observed. The terminal half-life of propofol after a 10-day infusion is 1 day to 3 days.

With increasing patient age, the dose of propofol needed to achieve a defined anesthetic end point (dose-requirement) decreases. This does not appear to be an age-related change in pharmacodynamics or brain sensitivity, as measured by EEG burst suppression. With increasing patient age, pharmacokinetic changes are such that, for a given IV bolus dose, higher peak plasma concentrations occur, which can explain the decreased dose requirement. These higher peak plasma concentrations in the elderly can predispose patients to cardiorespiratory effects including hypotension, apnea, airway obstruction, and/or arterial oxygen desaturation. The higher plasma levels reflect an age-related decrease in volume of distribution and intercompartmental clearance. Lower doses are therefore recommended for initiation and maintenance of sedation and anesthesia in elderly patients (see DOSAGE AND ADMINISTRATION).

The pharmacokinetics of propofol were studied in children between 3 years and 12 years of age who received propofol injectable emulsion for periods of approximately 1 hour to 2 hours. The observed distribution and clearance of propofol in these children were similar to adults.

Propofol injectable emulsion was studied in clinical trials which included cardiac surgical patients. Most patients were 3 years of age or older. The majority of the patients were healthy ASA-PS I or II patients. The range of doses in these studies are described in Tables 1 and 2.

Propofol injectable emulsion was studied in patients undergoing craniotomy for supratentorial tumors in two clinical trials. The mean lesion size (anterior/posterior × lateral) was 31 mm × 32 mm in one trial and 55 mm × 42 mm in the other trial respectively. Anesthesia was induced with a median propofol dose of 1.4 mg/kg (range: 0.9 mg/kg to 6.9 mg/kg) and maintained with a median maintenance propofol dose of 146 mcg/kg/min (range: 68 mcg/kg/min to 425 mcg/kg/min). The median duration of the propofol maintenance infusion was 285 minutes (range: 48 minutes to 622 minutes).

Propofol injectable emulsion was administered by infusion in a controlled clinical trial to evaluate its effect on cerebrospinal fluid pressure (CSFP). The mean arterial pressure was maintained relatively constant over 25 minutes with a change from baseline of -4% ± 17% (mean ± SD). The change in CSFP was -46% ± 14%. As CSFP is an indirect measure of intracranial pressure (ICP), propofol injectable emulsion, when given by infusion or slow bolus in combination with hypocarbia, is capable of decreasing ICP independent of changes in arterial pressure.

Across all clinical studies, the mean infusion maintenance rate for all propofol injectable emulsion patients was 27 ± 21 mcg/kg/min. The maintenance infusion rates required to maintain adequate sedation ranged from 2.8 mcg/kg/min to 130 mcg/kg/min. The infusion rate was lower in patients over 55 years of age (approximately 20 mcg/kg/min) compared to patients under 55 years of age (approximately 38 mcg/kg/min). Although there are reports of reduced analgesic requirements, most patients received opioids for analgesia during maintenance of ICU sedation. In these studies, morphine or fentanyl was used as needed for analgesia. Some patients also received benzodiazepines and/or neuromuscular blocking agents. During long-term maintenance of sedation, some ICU patients were awakened once or twice every 24 hours for assessment of neurologic or respiratory function.

In hemodynamically stable head trauma patients ranging in age from 19 years to 43 years, adequate sedation was maintained with propofol injectable emulsion or morphine. There were no apparent differences in adequacy of sedation, intracranial pressure, cerebral perfusion pressure, or neurologic recovery between the treatment groups. In literature reports of severely head-injured patients in Neurosurgical ICUs, propofol injectable emulsion infusion and hyperventilation, both with and without diuretics, controlled intracranial pressure while maintaining cerebral perfusion pressure. In some patients, bolus doses resulted in decreased blood pressure and compromised cerebral perfusion pressure.

Propofol injectable emulsion was found to be effective in status epilepticus which was refractory to the standard anticonvulsant therapies. For these patients, as well as for ARDS/respiratory failure and tetanus patients, sedation maintenance dosages were generally higher than those for other critically ill patient populations.

A single, randomized, controlled, clinical trial that evaluated the safety and effectiveness of propofol versus standard sedative agents (SSA) was conducted on 327 pediatric ICU patients. Patients were randomized to receive either propofol 2% (113 patients), propofol 1% (109 patients), or an SSA (e.g., lorazepam, chloral hydrate, fentanyl, ketamine, morphine, or phenobarbital). Propofol therapy was initiated at an infusion rate of 5.5 mg/kg/hr and titrated as needed to maintain sedation at a standardized level. The results of the study showed an increase in the number of deaths in patients treated with propofol as compared to SSAs. Of the 25 patients who died during the trial or within the 28-day follow-up period: 12 (11% were) in the propofol 2% treatment group, 9 (8% were) in the propofol 1% treatment group, and 4% were (4%) in the SSA treatment group. The differences in mortality rate between the groups were not statistically significant. Review of the deaths failed to reveal a correlation with underlying disease status or a correlation to the drug or a definitive pattern to the causes of death.

In post-CABG (coronary artery bypass graft) patients, the maintenance rate of propofol administration was usually low (median 11 mcg/kg/min) due to the intraoperative administration of high opioid doses. Patients receiving propofol injectable emulsion required 35% less nitroprusside than midazolam patients. During initiation of sedation in post-CABG patients, a 15% to 20% decrease in blood pressure was seen in the first 60 minutes. It was not possible to determine cardiovascular effects in patients with severely compromised ventricular function.