Nifedipine is a drug belonging to a class of pharmacological agents known as the calcium channel blockers. Nifedipine is 3,5-pyridinedicarboxylic acid, 1,4-dihydro-2,6-dimethyl-4-(2-nitrophenyl)-, dimethyl ester, C17H18N2O6, and has the structural formula: 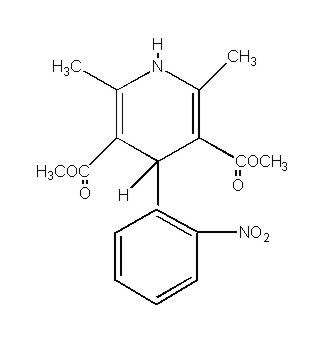 Nifedipine is a yellow crystalline substance, practically insoluble in water but soluble in ethanol. It has a molecular weight of 346.3. PROCARDIA XL is a registered trademark for Nifedipine GITS. Nifedipine GITS (Gastrointestinal Therapeutic System) Tablet is formulated as a once-a-day controlled-release tablet for oral administration to provide 30, 60, or 90 mg of nifedipine.

PROCARDIA XL® Extended Release Tablet is similar in appearance to a conventional tablet. It consists, however, of a semipermeable membrane surrounding an osmotically active drug core. The core itself is divided into two layers: an "active" layer containing the drug, and a "push" layer containing pharmacologically inert (but osmotically active) components. As water from the gastrointestinal tract enters the tablet, pressure increases in the osmotic layer and "pushes" against the drug layer, releasing drug through the precision laser-drilled tablet orifice in the active layer.

PROCARDIA XL Extended Release Tablet is designed to provide nifedipine at an approximately constant rate over 24 hours. This controlled rate of drug delivery into the gastrointestinal lumen is independent of pH or gastrointestinal motility. PROCARDIA XL depends for its action on the existence of an osmotic gradient between the contents of the bi-layer core and fluid in the gastrointestinal tract. Drug delivery is essentially constant as long as the osmotic gradient remains constant, and then gradually falls to zero. Upon swallowing, the biologically inert components of the tablet remain intact during gastrointestinal transit and are eliminated in the feces as an insoluble shell.