Pamidronate is not metabolized and is exclusively eliminated by renal excretion.

After administration of 30, 60, and 90 mg of pamidronate disodium over 4 hours, and 90 mg of pamidronate disodium over 24 hours, an overall mean ± SD of 46 ± 16% of the drug was excreted unchanged in the urine within 120 hours. Cumulative urinary excretion was linearly related to dose. The mean ± SD elimination half-life is 28 ± 7 hours. Mean ± SD total and renal clearances of pamidronate were 107 ± 50 mL/min and 49 ± 28 mL/min, respectively. The rate of elimination from bone has not been determined.

There are no data available on the effects of age, gender, or race on the pharmacokinetics of pamidronate.

Pamidronate is not labeled for use in the pediatric population.

Figure 1: Pamidronate renal clearance as a function of creatinine clearance in patients with normal and impaired renal function.

The lines are the mean prediction line and 95% confidence intervals. 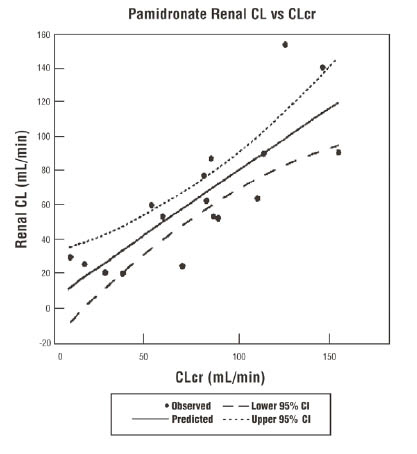 There are no human pharmacokinetic data for drug interactions with pamidronate disodium.

After intravenous administration of radiolabeled pamidronate in rats, approximately 50% to 60% of the compound was rapidly adsorbed by bone and slowly eliminated from the body by the kidneys. In rats given 10 mg/kg bolus injections of radiolabeled pamidronate disodium, approximately 30% of the compound was found in the liver shortly after administration and was then redistributed to bone or eliminated by the kidneys over 24 to 48 hours. Studies in rats injected with radiolabeled pamidronate disodium showed that the compound was rapidly cleared from the circulation and taken up mainly by bones, liver, spleen, teeth, and tracheal cartilage. Radioactivity was eliminated from most soft tissues within 1 to 4 days; was detectable in liver and spleen for 1 and 3 months, respectively; and remained high in bones, trachea, and teeth for 6 months after dosing. Bone uptake occurred preferentially in areas of high bone turnover. The terminal phase of elimination half-life in bone was estimated to be approximately 300 days.

Urinary calcium/creatinine and urinary hydroxyproline/creatinine ratios decrease and usually return to within or below normal after treatment with pamidronate disodium. These changes occur within the first week after treatment, as do decreases in serum calcium levels, and are consistent with an antiresorptive pharmacologic action.

Osteoclastic hyperactivity resulting in excessive bone resorption is the underlying pathophysiologic derangement in metastatic bone disease and hypercalcemia of malignancy. Excessive release of calcium into the blood as bone is resorbed results in polyuria and gastrointestinal disturbances, with progressive dehydration and decreasing glomerular filtration rate. This, in turn, results in increased renal resorption of calcium, setting up a cycle of worsening systemic hypercalcemia. Correction of excessive bone resorption and adequate fluid administration to correct volume deficits are therefore essential to the management of hypercalcemia.

Most cases of hypercalcemia associated with malignancy occur in patients who have breast cancer; squamous-cell tumors of the lung or head and neck; renal-cell carcinoma; and certain hematologic malignancies, such as multiple myeloma and some types of lymphomas. A few less-common malignancies, including vasoactive intestinal-peptide-producing tumors and cholangiocarcinoma, have a high incidence of hypercalcemia as a metabolic complication. Patients who have hypercalcemia of malignancy can generally be divided into two groups, according to the pathophysiologic mechanism involved.

In humoral hypercalcemia, osteoclasts are activated and bone resorption is stimulated by factors such as parathyroid-hormone-related protein, which are elaborated by the tumor and circulate systemically. Humoral hypercalcemia usually occurs in squamous-cell malignancies of the lung or head and neck or in genitourinary tumors such as renal-cell carcinoma or ovarian cancer. Skeletal metastases may be absent or minimal in these patients.

Extensive invasion of bone by tumor cells can also result in hypercalcemia due to local tumor products that stimulate bone resorption by osteoclasts. Tumors commonly associated with locally mediated hypercalcemia include breast cancer and multiple myeloma.

Total serum calcium levels in patients who have hypercalcemia of malignancy may not reflect the severity of hypercalcemia, since concomitant hypoalbuminemia is commonly present. Ideally, ionized calcium levels should be used to diagnose and follow hypercalcemic conditions; however, these are not commonly or rapidly available in many clinical situations. Therefore, adjustment of the total serum calcium value for differences in albumin levels is often used in place of measurement of ionized calcium; several nomograms are in use for this type of calculation (see DOSAGE AND ADMINISTRATION).

In one double-blind clinical trial, 52 patients who had hypercalcemia of malignancy were enrolled to receive 30 mg, 60 mg, or 90 mg of pamidronate disodium as a single 24-hour intravenous infusion if their corrected serum calcium levels were ≥ 12.0 mg/dL after 48 hours of saline hydration.

In a third multicenter, randomized, parallel double-blind trial, a group of 69 cancer patients with hypercalcemia was enrolled to receive 60 mg of pamidronate disodium as a 4- or 24-hour infusion, which was compared to a saline-treatment group. Patients who had a corrected serum calcium level of ≥ 12.0 mg/dL after 24 hours of saline hydration were eligible for this trial.

In all three trials, patients treated with pamidronate disodium had similar response rates in the presence or absence of bone metastases. Concomitant administration of furosemide did not affect response rates.

Thirty-two patients who had recurrent or refractory hypercalcemia of malignancy were given a second course of 60 mg of pamidronate disodium over a 4- or 24-hour period. Of these, 41% showed a complete response and 16% showed a partial response to the retreatment, and these responders had about a 3 mg/dL fall in mean-corrected serum calcium levels 7 days after retreatment.

The effects of pamidronate disodium on serum alkaline phosphatase (SAP) and urine hydroxyproline/creatinine ratios (UOHP/C) are summarized in the following table:

The median maximum percent decreases from baseline in serum alkaline phosphatase and urine hydroxyproline/creatinine ratios were 25%, 41%, and 57%, and 25%, 47% and 61% for the 15 mg, 45 mg, and 90 mg groups, respectively. The median time to response (≥ 50% decrease) for serum alkaline phosphatase was approximately 1 month for the 90 mg group, and the response duration ranged from 1 to 372 days.

Osteolytic bone metastases commonly occur in patients with multiple myeloma or breast cancer. These cancers demonstrate a phenomenon known as osteotropism, meaning they possess an extraordinary affinity for bone. The distribution of osteolytic bone metastases in these cancers is predominantly in the axial skeleton, particularly the spine, pelvis, and ribs, rather than the appendicular skeleton, although lesions in the proximal femur and humerus are not uncommon. This distribution is similar to the red bone marrow in which slow blood flow possibly assists attachment of metastatic cells. The surface-to-volume ratio of trabecular bone is much higher than cortical bone, and therefore disease processes tend to occur more floridly in trabecular bone than at sites of cortical tissue.

These bone changes can result in patients having evidence of osteolytic skeletal destruction leading to severe bone pain that requires either radiation therapy or narcotic analgesics (or both) for symptomatic relief. These changes also cause pathologic fractures of bone in both the axial and appendicular skeleton. Axial skeletal fractures of the vertebral bodies may lead to spinal cord compression or vertebral body collapse with significant neurologic complications. Also, patients may experience episode(s) of hypercalcemia.

In addition, decreases in pain scores from baseline occurred at the last measurement for those pamidronate disodium patients with pain at baseline (P=.026) but not in the placebo group. At the last measurement, a worsening from baseline was observed in the placebo group for the Spitzer quality of life variable (P<.001) and ECOG performance status (P<.011) while there was no significant deterioration from baseline in these parameters observed in pamidronate disodium-treated patients.*

Two double-blind, randomized, placebo-controlled trials compared the safety and efficacy of 90 mg of pamidronate disodium infused over 2 hours every 3 to 4 weeks for 24 months to that of placebo in preventing SREs in breast cancer patients with osteolytic bone metastases who had one or more predominantly lytic metastases of at least 1 cm in diameter: one in patients being treated with antineoplastic chemotherapy and the second in patients being treated with hormonal antineoplastic therapy at trial entry.

Pain and analgesic scores, ECOG performance status and Spitzer quality of life index were measured at baseline and periodically during the trials. The changes from baseline to the last measurement carried forward are shown in the following table: