Nicotine, the chief alkaloid in tobacco products, binds stereo-selectively to nicotinic-cholinergic receptors at the autonomic ganglia, in the adrenal medulla, at neuromuscular junctions, and in the brain. Two types of central nervous system effects are believed to be the basis of nicotine's positively reinforcing properties. A stimulating effect is exerted mainly in the cortex via the locus ceruleus and a reward effect is exerted in the limbic system. At low doses, the stimulant effects predominate while at high doses the reward effects predominate. Intermittent intravenous administration of nicotine activates neurohormonal pathways, releasing acetylcholine, norepinephrine, dopamine, serotonin, vasopressin, beta-endorphin, growth hormone, and ACTH.

The cardiovascular effects of nicotine include peripheral vasoconstriction, tachycardia, and elevated blood pressure. Acute and chronic tolerance to nicotine develops from smoking tobacco or ingesting nicotine preparations. Acute tolerance (a reduction in response for a given dose) develops rapidly (less than 1 hour), but not at the same rate for different physiologic effects (skin temperature, heart rate, subjective effects). Withdrawal symptoms such as cigarette craving can be reduced in most individuals by plasma nicotine levels lower than those from smoking.

Both smoking and nicotine can increase circulating cortisol and catecholamines, and tolerance does not develop to the catecholamine-releasing effects of nicotine. Changes in the response to a concomitantly administered adrenergic agonist or antagonist should be watched for when nicotine intake is altered during NICOTROL NS therapy and/or smoking cessation (See PRECAUTIONS, Drug Interactions).

Each actuation of NICOTROL NS delivers a metered 50 microliter spray containing approximately 0.5 mg of nicotine. One dose is considered 1 mg of nicotine (2 sprays, one in each nostril). 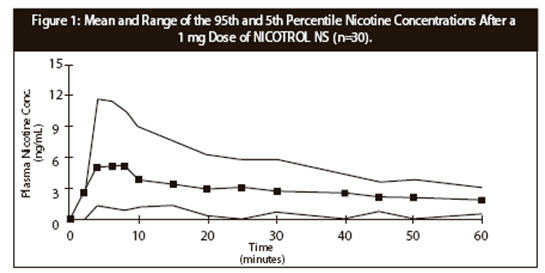 The data from Table 1 is derived from a three-way cross-over study of repeated applications of NICOTROL NS in sixteen smokers (8 male, 8 female) ranging in age from 18 to 48 years. There is a slight deviation from dose-concentration proportionality from one dose to three doses of NICOTROL NS per hour as shown in Figure 2.

Sixteen smokers (7 males and 9 females) ranging in age from 22 to 44 years were dosed with 1 mg of NICOTROL NS every hour for 10 hours. The pharmacokinetic parameters that were obtained are presented in Table 2.

The volume of distribution following IV administration of nicotine is approximately 2 to 3 L/kg. Plasma protein binding of nicotine is <5%. Therefore, changes in nicotine binding from use of concomitant drugs or alterations of plasma proteins by disease states would not be expected to have significant effects on nicotine kinetics.

About 10% of the nicotine absorbed is excreted unchanged in the urine. This may be increased to up to 30% with high urine flow rates and urinary acidification below pH 5. The average plasma clearance is about 1.2 L/min in a healthy adult smoker. The apparent elimination half-life of nicotine from NICOTROL NS is 1 to 2 hours.

The data were well described by a two-compartment model with first-order input.

Intersubject variability (50% coefficient of variation) among the pharmacokinetic parameters (AUC, Cmax and Clearance/kg) were observed for both genders. There were no differences between females or males in the kinetics of NICOTROL NS.

Did you find an answer to your question? Yes No
Didn’t find what you were looking for? Contact us.
MI Digital Assistant