Download Prescribing Information
Show All Hide All
Indications and Usage

NEOSPORIN G.U. Irrigant is indicated for short-term use (up to 10 days) as a continuous irrigant or rinse in the urinary bladder of abacteriuric patients to help prevent bacteriuria and gram-negative rod...

NEOSPORIN G.U. Irrigant is indicated for short-term use (up to 10 days) as a continuous irrigant or rinse in the urinary bladder of abacteriuric patients to help prevent bacteriuria and gram-negative rod septicemia associated with the use of indwelling catheters.

Since organisms gain entrance to the bladder by way of, through, and around the catheter, significant bacteriuria is induced by bacterial multiplication in the bladder urine, in the mucoid film often present between catheter and urethra, and in other sites. Urinary tract infection may result from the repeated presence in the urine of large numbers of pathogenic bacteria. The use of closed systems with indwelling catheters has been shown to reduce the risk of infection. A three-way closed catheter system with constant neomycin-polymyxin B bladder rinse is indicated to prevent the development of infection while using indwelling catheters.

If uropathogens are isolated, they should be identified and tested for susceptibility so that appropriate antimicrobial therapy for systemic use can be initiated.

Did you find an answer to your question? Yes No
Read less
Dosage and Administration

This preparation is specifically designed for use with "three-way" catheters or with other catheter systems permitting continuous irrigation of the urinary bladder. The...

This preparation is specifically designed for use with "three-way" catheters or with other catheter systems permitting continuous irrigation of the urinary bladder. The usual irrigation dose is one 1-mL ampul a day for up to 10 days.

Using strict aseptic techniques, the contents of one 1-mL ampul of NEOSPORIN G.U. Irrigant Sterile (neomycin sulfate-polymyxin B sulfate solution for irrigation) should be added to a 1,000-mL container of isotonic saline solution. This container should then be connected to the inflow lumen of the "three-way" catheter which has been inserted with full aseptic precautions; use of a sterile lubricant is recommended during insertion of the catheter. The outflow lumen should be connected, via a sterile disposable plastic tube, to a disposable plastic collection bag. Stringent procedures, such as taping the inflow and outflow junction at the catheter, should be observed when necessary to insure the junctional integrity of the system.

It is important that the rinse of the bladder be continuous; the inflow or rinse solution should not be interrupted for more than a few minutes.

Did you find an answer to your question? Yes No
Read less
Contraindications

Hypersensitivity to neomycin, the polymyxins, or any ingredient in the solution is a contraindication to its use. A history of hypersensitivity or serious toxic reaction to an aminoglycoside may also...

Did you find an answer to your question? Yes No
Read less
Warnings and Precautions

PROPHYLACTIC BLADDER CARE WITH NEOSPORIN G.U. IRRIGANT STERILE SHOULD NOT BE GIVEN WHERE THERE IS A POSSIBILITY OF SYSTEMIC ABSORPTION. NEOSPORIN G.U. IRRIGANT STERILE SHOULD NOT BE USED FOR IRRIGATION OTHER THAN FOR THE URINARY BLADDER. Systemic absorption after topical application of neomycin to open wounds, burns, and granulating surfaces is significant and serum concentrations comparable to and often higher than those attained following oral and parenteral therapy have been reported. Absorption of neomycin from the denuded bladder surface has been reported.

However, the likelihood of toxicity following topical irrigation of the intact urinary bladder with NEOSPORIN G.U. Irrigant Sterile is low since no appreciable amounts of these antibiotics enter the systemic circulation by this route if irrigation does not exceed 10 days.

NEOSPORIN G.U. Irrigant is intended for continuous prophylactic irrigation of the lumen of the intact urinary bladder of patients with indwelling catheters. Patients should be under constant supervision by a physician. Irrigation should be avoided in patients with defects in the bladder mucosa or bladder wall, such as vesical rupture, or in association with operative procedures on the bladder wall, because of the risk of toxicity due to systemic absorption following diffusion into absorptive tissues and spaces. When absorbed, neomycin and polymyxin B are nephrotoxic antibiotics, and the nephrotoxic potentials are additive. In addition, both antibiotics, when absorbed, are neurotoxins: neomycin can destroy fibers of the acoustic nerve causing permanent bilateral deafness; neomycin and polymyxin B are additive in their neuromuscular blocking effects, not only in terms of potency and duration, but also in terms of characteristics of the blocks produced.

Aminoglycosides, when absorbed, can cause fetal harm when administered to a pregnant woman. Aminoglycoside antibiotics cross the placenta and there have been several reports of total, irreversible, bilateral, congenital deafness in children whose mothers received streptomycin during pregnancy. Although serious side effects have not been reported in the treatment of pregnant women with other aminoglycosides, the potential for harm exists. If NEOSPORIN G.U. Irrigant Sterile is used during pregnancy, the patient should be apprised of the potential hazard to the fetus (see PRECAUTIONS).

Ototoxicity, nephrotoxicity, and neuromuscular blockade may occur if NEOSPORIN G.U. Irrigant ingredients are systemically absorbed (see WARNINGS ). Absorption of neomycin from the denuded bladder surface has been reported. Patients with impaired renal function, infants, dehydrated patients, elderly patients, and patients receiving high doses of prolonged treatment are especially at risk for the development of toxicity.

Irrigation of the bladder with NEOSPORIN G.U. Irrigant may result in overgrowth of nonsusceptible organisms, including fungi. Appropriate measures should be taken if this occurs. The safety and effectiveness of the preparation for use in the care of patients with recent lower urinary tract surgery have not been established.

Urine specimens should be collected during prophylactic bladder care for urinalysis, culture, and susceptibility testing. Positive cultures suggest the presence of organisms which are resistant to the bladder rinse antibiotics.

Safety and effectiveness in pediatric patients have not been established.

Did you find an answer to your question? Yes No
Read less
Adverse Reactions

Signs of ototoxicity and nephrotoxicity have been reported following parenteral use of these drugs and following the oral and topical use of neomycin (see WARNINGS).

Did you find an answer to your question? Yes No
Read less
Description

NEOSPORIN G.U. Irrigant is a concentrated sterile antibiotic solution to be diluted for urinary bladder irrigation. Each mL contains neomycin sulfate equivalent to 40 mg neomycin base, 200,000 units polymyxin B...

NEOSPORIN G.U. Irrigant is a concentrated sterile antibiotic solution to be diluted for urinary bladder irrigation. Each mL contains neomycin sulfate equivalent to 40 mg neomycin base, 200,000 units polymyxin B sulfate, and Water for Injection. The 20-mL multiple-dose vial contains, in addition to the above, 1 mg methylparaben (0.1%) added as a preservative.

Neomycin sulfate, an antibiotic of the aminoglycoside group, is the sulfate salt of neomycin B and C produced by Streptomyces fradiae . It has a potency equivalent to not less than 600 µg of neomycin per mg. The structural formulae are: 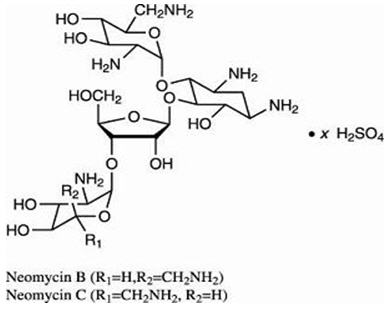 Polymyxin B sulfate, a polypeptide antibiotic, is the sulfate salt of polymyxin B1 and B2 produced by the growth of Bacillus polymyxa. It has a potency of not less than 6,000 polymyxin B units per mg. The structural formulae are:

Did you find an answer to your question? Yes No
Read less
Clinical Pharmacology

After prophylactic irrigation of the intact urinary bladder, neomycin and polymyxin B are absorbed in clinically insignificant quantities. A neomycin serum level of 0.1 µg/mL was observed in three of 33...

After prophylactic irrigation of the intact urinary bladder, neomycin and polymyxin B are absorbed in clinically insignificant quantities. A neomycin serum level of 0.1 µg/mL was observed in three of 33 patients receiving the rinse solution. This level is well below that which has been associated with neomycin-induced toxicity.

When used topically, polymyxin B sulfate and neomycin are rarely irritating.

The prepared NEOSPORIN G.U. Irrigant Sterile solution is bactericidal. The aminoglycosides act by inhibiting normal protein synthesis in susceptible microorganisms. Polymyxins increase the permeability of bacterial cell wall membranes. The solution is active in vitro against

It is not active in vitro against Serratia marcescens and streptococci.

Bacterial resistance may develop following the use of the antibiotics in the catheter-rinse solution.

Did you find an answer to your question? Yes No
Read less
How Supplied/Storage and Handling

Did you find an answer to your question? Yes No
Read less
Other