Two randomized, open-label, multicenter studies evaluated the use of ELLENCE 100 to 120 mg/m2 in combination with cyclophosphamide and fluorouracil for the adjuvant treatment of patients with axillary-node positive breast cancer and no evidence of distant metastatic disease (Stage II or III). Study MA-5 evaluated 120 mg/m2 of ELLENCE per course in combination with cyclophosphamide and fluorouracil (CEF-120 regimen). This study randomized premenopausal and perimenopausal women with one or more positive lymph nodes to an ELLENCE-containing CEF-120 regimen or to a CMF regimen. Study GFEA-05 evaluated the use of 100 mg/m2 of ELLENCE per course in combination with fluorouracil and cyclophosphamide (FEC-100). This study randomized pre- and postmenopausal women to the FEC-100 regimen or to a lower-dose FEC-50 regimen. In the GFEA-05 study, eligible patients were either required to have ≥ 4 nodes involved with tumor or, if only 1 to 3 nodes were positive, to have negative estrogen- and progesterone-receptors and a histologic tumor grade of 2 or 3. A total of 1281 women participated in these studies. Patients with T4 tumors were not eligible for either study. Table 5 shows the treatment regimens that the patients received. Relapse-free survival was defined as time to occurrence of a local, regional, or distant recurrence, or disease-related death. Patients with contralateral breast cancer, second primary malignancy, or death from causes other than breast cancer were censored at the time of the last visit prior to these events.

In the MA-5 trial, the median age of the study population was 45 years. Approximately 60% of patients had 1 to 3 involved nodes and approximately 40% had ≥ 4 nodes involved with tumor. In the GFEA-05 study, the median age was 51 years and approximately half of the patients were postmenopausal. About 17% of the study population had 1 to 3 positive nodes and 80% of patients had ≥ 4 involved lymph nodes. Demographic and tumor characteristics were well-balanced between treatment arms in each study.

Relapse-free survival (RFS) and overall survival (OS) were analyzed using Kaplan-Meier methods in the intent-to-treat (ITT) patient populations in each study. Results were initially analyzed after up to 5 years of follow-up and these results are presented in the text below and in Table 6. Results after up to 10 years of follow-up are presented in Table 6. In Study MA-5, ELLENCE-containing combination therapy (CEF-120) showed significantly longer RFS than CMF (5-year estimates were 62% versus 53%, stratified logrank for the overall RFS p=0.013). The estimated reduction in the risk of relapse was 24% at 5 years. The OS was also greater for the ELLENCE-containing CEF-120 regimen than for the CMF regimen (5-year estimate 77% versus 70%; stratified logrank for overall survival p=0.043; non-stratified logrank p=0.13). The estimated reduction in the risk of death was 29% at 5 years.

Although the trials were not powered for subgroup analyses, in the MA-5 study, improvements in favor of CEF-120 vs. CMF were observed, in RFS and OS both in patients with 1–3 node positive and in those with ≥4 node positive tumor involvement. In the GFEA-05 study, improvements in RFS and OS were observed in both pre-and postmenopausal women treated with FEC-100 compared to FEC-50. 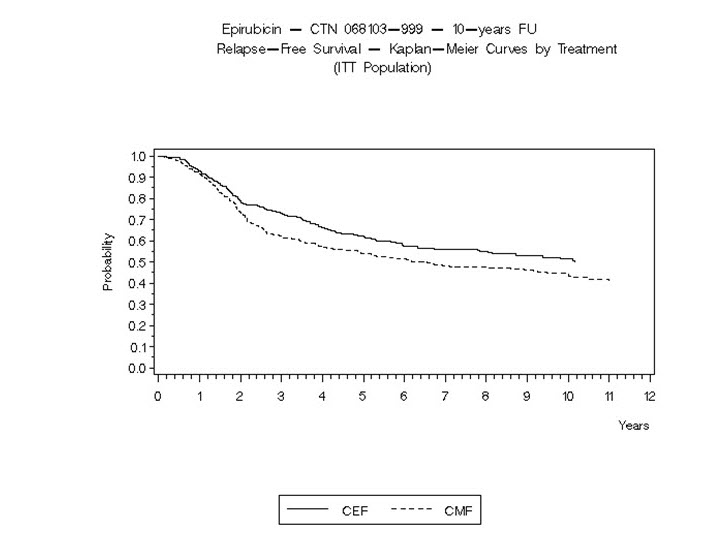 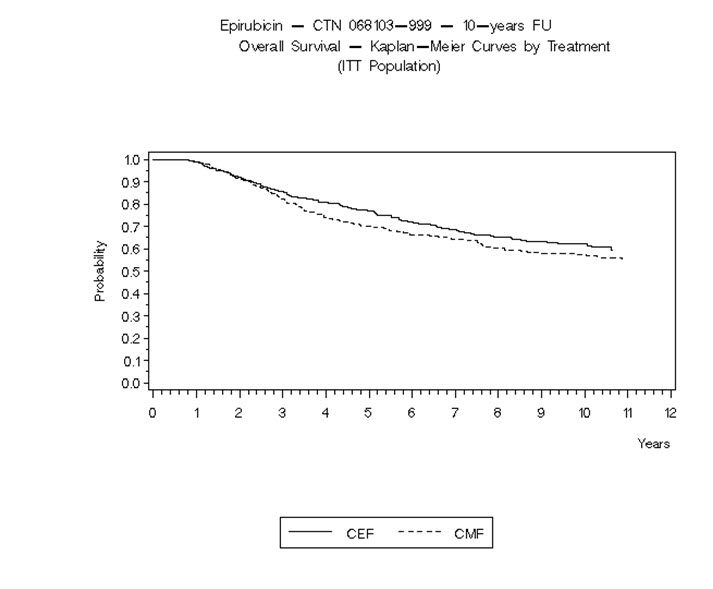 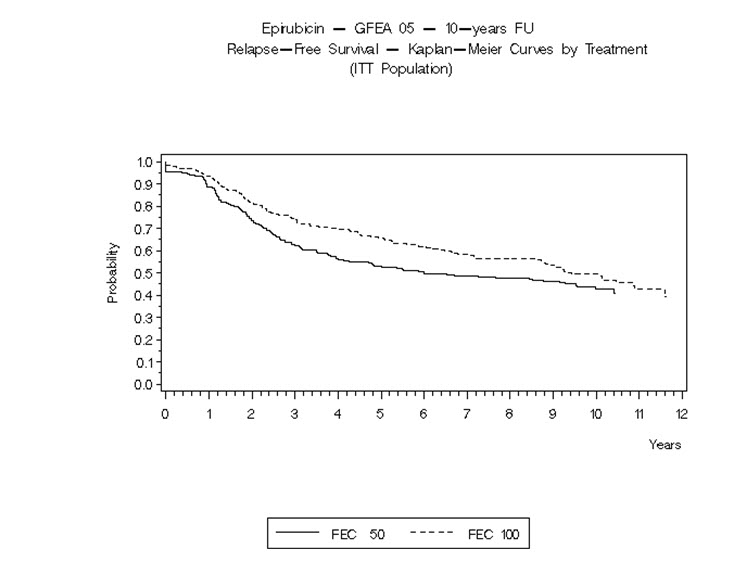