The following clinically significant adverse reactions are described elsewhere in the labeling:

Table 2 describes the incidence of delayed adverse reactions in patients participating in the MA-5 and GFEA-05 trials.

Dose-dependent, reversible leukopenia and/or neutropenia is the predominant manifestation of hematologic toxicity associated with ELLENCE and represents the most common acute dose-limiting toxicity of this drug. In most cases, the white blood cell (WBC) nadir is reached 10 to 14 days from drug administration. Leukopenia/neutropenia is usually transient, with WBC and neutrophil counts generally returning to normal values by Day 21 after drug administration. As with other cytotoxic agents, ELLENCE at the recommended dose in combination with cyclophosphamide and fluorouracil can produce severe leukopenia and neutropenia. Severe thrombocytopenia and anemia may also occur. Clinical consequences of severe myelosuppression include fever, infection, septicemia, septic shock, hemorrhage, tissue hypoxia, symptomatic anemia, or death. If myelosuppressive complications occur, use appropriate supportive measures (e.g., intravenous antibiotics, colony-stimulating factors, transfusions). Myelosuppression requires careful monitoring. Assess total and differential WBC, red blood cell (RBC), and platelet counts before and during each cycle of therapy with ELLENCE [see Warnings and Precautions (5.4)].

A dose-dependent mucositis (mainly oral stomatitis, less often esophagitis) may occur in patients treated with ELLENCE. Clinical manifestations of mucositis may include a pain or burning sensation, erythema, erosions, ulcerations, bleeding, or infections. Mucositis generally appears early after drug administration and, if severe, may progress over a few days to mucosal ulcerations; most patients recover from this adverse event by the third week of therapy. Hyperpigmentation of the oral mucosa may also occur. Nausea, vomiting, and occasionally diarrhea and abdominal pain can also occur. Severe vomiting and diarrhea may produce dehydration. Antiemetics may reduce nausea and vomiting; consider prophylactic use of antiemetics before therapy [see Dosage and Administration (2.1)].

Alopecia occurs frequently, but is usually reversible, with hair regrowth occurring within 2 to 3 months from the termination of therapy. Flushes, skin and nail hyperpigmentation, photosensitivity, and hypersensitivity to irradiated skin (radiation-recall reaction) have been observed. Urticaria and anaphylaxis have been reported in patients treated with ELLENCE; signs and symptoms of these reactions may vary from skin rash and pruritus to fever, chills, and shock.

Figure 2. Risk of AML/MDS in 7110 Patients Treated with ELLENCE 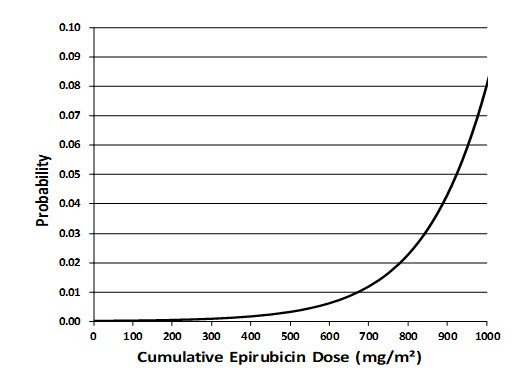 The cumulative probability of developing AML/MDS was found to be particularly increased in patients who received more than the maximum recommended cumulative dose of ELLENCE (720 mg/m2) or cyclophosphamide (6,300 mg/m2), as shown in Table 3.

The following adverse reactions have been identified during post-approval use of ELLENCE. Because these reactions are reported voluntarily from a population of uncertain size, it is not always possible to reliably estimate their frequency or establish a causal relationship to drug exposure.

Renal and urinary disorders: red coloration of urine for 1 to 2 days after administration