In one randomized trial, patients with a history of prior treatment with an anthracycline-containing regimen were assigned to treatment with docetaxel (100 mg/m2 every 3 weeks) or the combination of mitomycin (12 mg/m2 every 6 weeks) and vinblastine (6 mg/m2 every 3 weeks). Two hundred three patients were randomized to docetaxel and 189 to the comparator arm. Most patients had received prior chemotherapy for metastatic disease; only 27 patients on the docetaxel arm and 33 patients on the comparator arm entered the study following relapse after adjuvant therapy. Three-quarters of patients had measurable, visceral metastases. The primary endpoint was time to progression. The following table summarizes the study results (see Table 12).

In a second randomized trial, patients previously treated with an alkylating-containing regimen were assigned to treatment with docetaxel (100 mg/m2) or doxorubicin (75 mg/m2) every 3 weeks. One hundred sixty-one patients were randomized to docetaxel and 165 patients to doxorubicin. Approximately one-half of patients had received prior chemotherapy for metastatic disease, and one-half entered the study following relapse after adjuvant therapy. Three-quarters of patients had measurable, visceral metastases. The primary endpoint was time to progression. The study results are summarized below (see Table 13).

In another multicenter open-label, randomized trial (TAX313), in the treatment of patients with advanced breast cancer who progressed or relapsed after one prior chemotherapy regimen, 527 patients were randomized to receive docetaxel monotherapy 60 mg/m2 (n=151), 75 mg/m2 (n=188) or 100 mg/m2 (n=188). In this trial, 94% of patients had metastatic disease and 79% had received prior anthracycline therapy. Response rate was the primary endpoint. Response rates increased with docetaxel dose: 19.9% for the 60 mg/m2 group compared to 22.3% for the 75 mg/m2 and 29.8% for the 100 mg/m2 group; pair-wise comparison between the 60 mg/m2 and 100 mg/m2 groups was statistically significant (p=0.037).

Docetaxel was also studied in three single arm Japanese studies at a dose of 60 mg/m2, in 174 patients who had received prior chemotherapy for locally advanced or metastatic breast cancer. Among 26 patients whose best response to an anthracycline had been progression, the response rate was 34.6% (95% CI: 17.2–55.7), similar to the response rate in single arm studies of 100 mg/m2.

A multicenter, open-label, randomized trial (TAX316) evaluated the efficacy and safety of docetaxel for the adjuvant treatment of patients with axillary-node-positive breast cancer and no evidence of distant metastatic disease. After stratification according to the number of positive lymph nodes (1–3, 4+), 1491 patients were randomized to receive either docetaxel 75 mg/m2 administered 1-hour after doxorubicin 50 mg/m2 and cyclophosphamide 500 mg/m2 (TAC arm), or doxorubicin 50 mg/m2 followed by fluorouracil 500 mg/m2 and cyclophosphamide 500 mg/m2 (FAC arm). Both regimens were administered every 3 weeks for 6 cycles. Docetaxel was administered as a 1-hour infusion; all other drugs were given as intravenous bolus on day 1. In both arms, after the last cycle of chemotherapy, patients with positive estrogen and/or progesterone receptors received tamoxifen 20 mg daily for up to 5 years. Adjuvant radiation therapy was prescribed according to guidelines in place at participating institutions and was given to 69% of patients who received TAC and 72% of patients who received FAC. 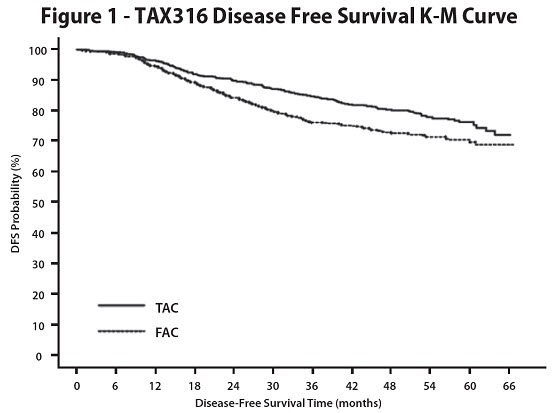 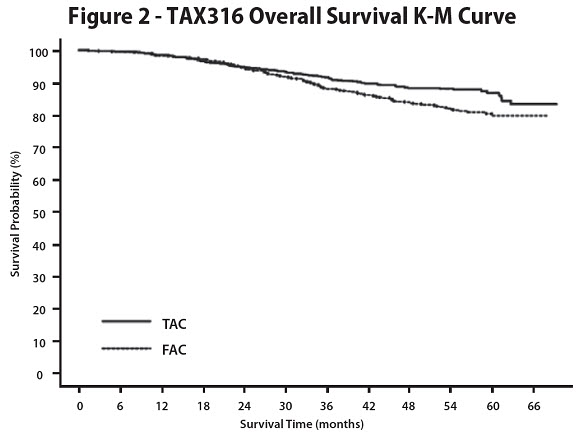 The following table describes the results of subgroup analyses for DFS and OS (see Table 14).

The efficacy and safety of docetaxel has been evaluated in patients with unresectable, locally advanced or metastatic non-small cell lung cancer whose disease has failed prior platinum-based chemotherapy or in patients who are chemotherapy-naïve.

Monotherapy with Docetaxel for NSCLC Previously Treated with Platinum-Based Chemotherapy

Two randomized, controlled trials established that a docetaxel dose of 75 mg/m2 was tolerable and yielded a favorable outcome in patients previously treated with platinum-based chemotherapy (see below). Docetaxel at a dose of 100 mg/m2, however, was associated with unacceptable hematologic toxicity, infections, and treatment-related mortality and this dose should not be used [see Boxed Warning, Dosage and Administration (2.7), Warnings and Precautions (5.3)].

In a second randomized trial (TAX320), 373 patients with locally advanced or metastatic non-small cell lung cancer, a history of prior platinum-based chemotherapy, and an ECOG performance status ≤2 were randomized to docetaxel 75 mg/m2, docetaxel 100 mg/m2 and a treatment in which the investigator chose either vinorelbine 30 mg/m2 days 1, 8, and 15 repeated every 3 weeks or ifosfamide 2 g/m2 days 1–3 repeated every 3 weeks. Forty percent of the patients in this study had a history of prior paclitaxel exposure. The primary endpoint was survival in both trials. The efficacy data for the docetaxel 75 mg/m2 arm and the comparator arms are summarized in Table 15 and Figures 3 and 4 showing the survival curves for the two studies.

Only one of the two trials (TAX317) showed a clear effect on survival, the primary endpoint; that trial also showed an increased rate of survival to one year. In the second study (TAX320) the rate of survival at one year favored docetaxel 75 mg/m2. 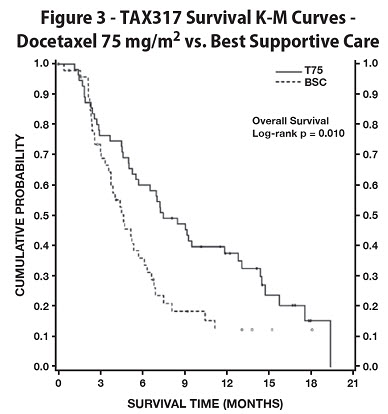 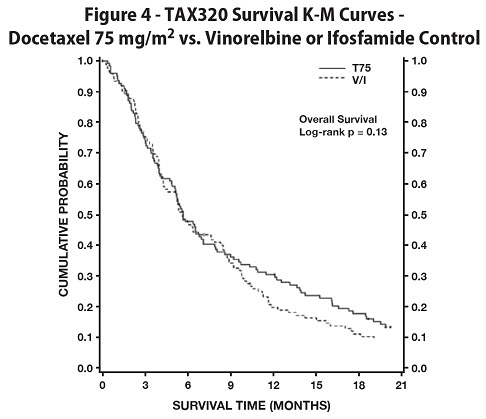 Patients treated with docetaxel at a dose of 75 mg/m2 experienced no deterioration in performance status and body weight relative to the comparator arms used in these trials.

In a randomized controlled trial (TAX326), 1218 patients with unresectable stage IIIB or IV NSCLC and no prior chemotherapy were randomized to receive one of three treatments: docetaxel 75 mg/m2 as a 1 hour infusion immediately followed by cisplatin 75 mg/m2 over 30 to 60 minutes every 3 weeks; vinorelbine 25 mg/m2 administered over 6 – 10 minutes on days 1, 8, 15, 22 followed by cisplatin 100 mg/m2 administered on day 1 of cycles repeated every 4 weeks; or a combination of docetaxel and carboplatin.

The primary efficacy endpoint was overall survival. Treatment with docetaxel+cisplatin did not result in a statistically significantly superior survival compared to vinorelbine+cisplatin (see table below). The 95% confidence interval of the hazard ratio (adjusted for interim analysis and multiple comparisons) shows that the addition of docetaxel to cisplatin results in an outcome ranging from a 6% inferior to a 26% superior survival compared to the addition of vinorelbine to cisplatin. The results of a further statistical analysis showed that at least (the lower bound of the 95% confidence interval) 62% of the known survival effect of vinorelbine when added to cisplatin (about a 2-month increase in median survival; Wozniak et al. JCO, 1998) was maintained. The efficacy data for the docetaxel+cisplatin arm and the comparator arm are summarized in Table 16.

The safety and efficacy of docetaxel in combination with prednisone in patients with metastatic castration-resistant prostate cancer were evaluated in a randomized multicenter active control trial. A total of 1006 patients with Karnofsky Performance Status (KPS) ≥60 were randomized to the following treatment groups:

All 3 regimens were administered in combination with prednisone 5 mg twice daily, continuously.

A multicenter, open-label, randomized trial was conducted to evaluate the safety and efficacy of Docetaxel Injection for the treatment of patients with advanced gastric adenocarcinoma, including adenocarcinoma of the gastroesophageal junction, who had not received prior chemotherapy for advanced disease. A total of 445 patients with KPS >70 were treated with either Docetaxel Injection (T) (75 mg/m2 on day 1) in combination with cisplatin (C) (75 mg/m2 on day 1) and fluorouracil (F) (750 mg/m2 per day for 5 days) or cisplatin (100 mg/m2 on day 1) and fluorouracil (1000 mg/m2 per day for 5 days). The length of a treatment cycle was 3 weeks for the TCF arm and 4 weeks for the CF arm. The demographic characteristics were balanced between the two treatment arms. The median age was 55 years, 71% were male, 71% were Caucasian, 24% were 65 years of age or older, 19% had a prior curative surgery and 12% had palliative surgery. The median number of cycles administered per patient was 6 (with a range of 1–16) for the TCF arm compared to 4 (with a range of 1–12) for the CF arm. Time to progression (TTP) was the primary endpoint and was defined as time from randomization to disease progression or death from any cause within 12 weeks of the last evaluable tumor assessment or within 12 weeks of the first infusion of study drugs for patients with no evaluable tumor assessment after randomization. The hazard ratio (HR) for TTP was 1.47 (CF/TCF, 95% CI: 1.19–1.83) with a significantly longer TTP (p=0.0004) in the TCF arm. Approximately 75% of patients had died at the time of this analysis. Overall survival was significantly longer (p=0.0201) in the TCF arm with a HR of 1.29 (95% CI: 1.04–1.61). Efficacy results are summarized in Table 19 and Figures 6 and 7.

Subgroup analyses were consistent with the overall results across age, gender and race. 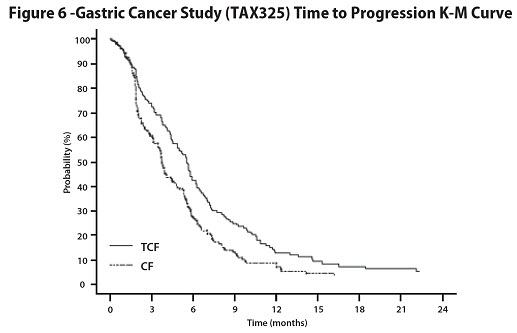 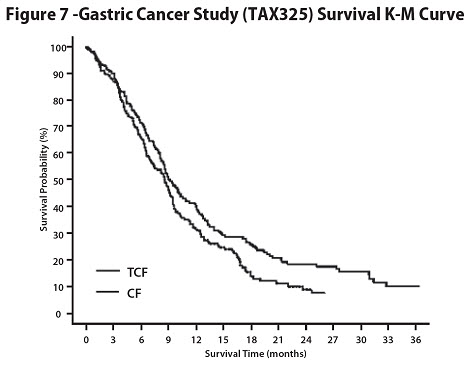 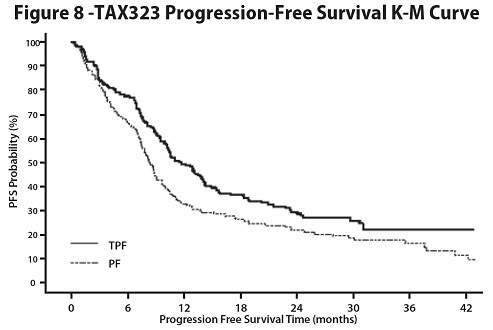 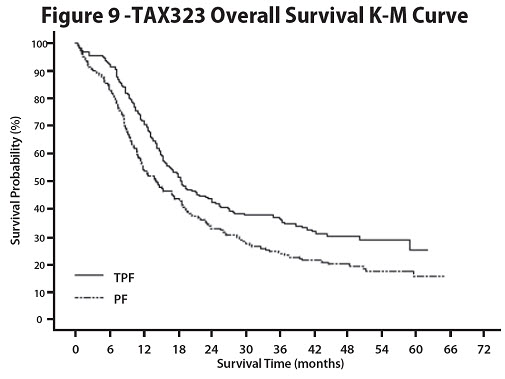 All patients in both treatment arms who did not have progressive disease were to receive 7 weeks of chemoradiotherapy (CRT) following induction chemotherapy 3 to 8 weeks after the start of the last cycle. During radiotherapy, carboplatin (AUC 1.5) was given weekly as a one-hour intravenous infusion for a maximum of 7 doses. Radiation was delivered with megavoltage equipment using once daily fractionation (2 Gy per day, 5 days per week for 7 weeks for a total dose of 70–72 Gy). Surgery on the primary site of disease and/or neck could be considered at anytime following completion of CRT. 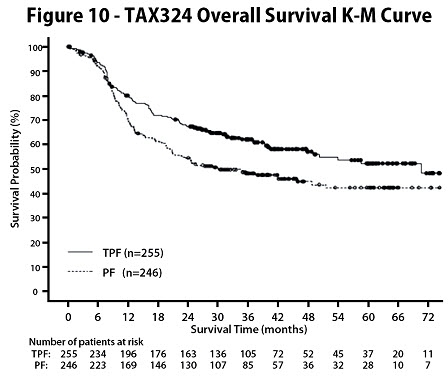