NOTE: For purposes of this indication, a clinical diagnosis of bacterial vaginosis is usually defined by the presence of a homogeneous vaginal discharge that (a) has a pH of greater than 4.5, (b) emits a "fishy" amine odor when mixed with a 10% KOH solution, and (c) contains clue cells on microscopic examination. Gram's stain results consistent with a diagnosis of bacterial vaginosis include (a) markedly reduced or absent Lactobacillus morphology, (b) predominance of Gardnerella morphotype, and (c) absent or few white blood cells.

Pseudomembranous colitis has been reported with nearly all antibacterial agents, including clindamycin, and may range in severity from mild to life-threatening. Orally and parenterally administered clindamycin has been associated with severe colitis, which may end fatally. Diarrhea, bloody diarrhea, and colitis (including pseudomembranous colitis) have been reported with the use of orally and parenterally administered clindamycin, as well as with topical (dermal and vaginal) formulations of clindamycin. Therefore, it is important to consider this diagnosis in patients who present with diarrhea subsequent to the administration of CLEOCIN Vaginal Ovules, because approximately 30% of the clindamycin dose is systemically absorbed from the vagina.

Treatment with antibacterial agents alters the normal flora of the colon and may permit overgrowth of clostridia. Studies indicate that a toxin produced by Clostridium difficile is a primary cause of "antibiotic-associated" colitis.

After the diagnosis of pseudomembranous colitis has been established, therapeutic measures should be initiated. Mild cases of pseudomembranous colitis usually respond to discontinuation of the drug alone. In moderate to severe cases, consideration should be given to management with fluids and electrolytes, protein supplementation, and treatment with an antibacterial drug clinically effective against Clostridium difficile colitis.

Onset of pseudomembranous colitis symptoms may occur during or after antimicrobial treatment.

The use of CLEOCIN Vaginal Ovules may result in the overgrowth of nonsusceptible organisms in the vagina. In clinical studies using CLEOCIN Vaginal Ovules, treatment-related moniliasis was reported in 2.7% and vaginitis in 3.6% of 589 nonpregnant women. Moniliasis, as reported here, includes the terms: vaginal or nonvaginal moniliasis and fungal infection. Vaginitis includes the terms: vulvovaginal disorder, vaginal discharge, and vaginitis/vaginal infection.

Information for the Patient

The patient should be instructed not to engage in vaginal intercourse or use other vaginal products (such as tampons or douches) during treatment with this product.

The patient should also be advised that these suppositories use an oleaginous base that may weaken latex or rubber products such as condoms or vaginal contraceptive diaphragms. Therefore, the use of such products within 72 hours following treatment with CLEOCIN Vaginal Ovules is not recommended.

Long-term studies in animals have not been performed with clindamycin to evaluate carcinogenic potential. Genotoxicity tests performed included a rat micronucleus test and an Ames test. Both tests were negative. Fertility studies in rats treated orally with up to 300 mg/kg/day (31 times the human exposure based on mg/m2) revealed no effects on fertility or mating ability.

In clinical trials with pregnant women, the systemic administration of clindamycin during the second and third trimesters, has not been associated with an increased frequency of congenital abnormalities.

CLEOCIN Vaginal Cream, 2%, has been studied in pregnant women during the second trimester. In women treated for 7 days, abnormal labor was reported more frequently in patients who received CLEOCIN Vaginal Cream compared to those receiving placebo (1.1% vs. 0.5% of patients, respectively).

Reproduction studies have been performed in rats and mice using oral and parenteral doses of clindamycin up to 600 mg/kg/day (62 and 25 times, respectively, the maximum human dose based on body surface area) and have revealed no evidence of harm to the fetus due to clindamycin. Cleft palates were observed in fetuses from one mouse strain treated intraperitoneally with clindamycin at 200 mg/kg/day (about 10 times the recommended dose based on body surface area conversions). Since this effect was not observed in other mouse strains or in other species, the effect may be strain specific.

Clindamycin has the potential to cause adverse effects on the breast-fed infant's gastrointestinal flora. If oral or intravenous clindamycin is required by a nursing mother, it is not a reason to discontinue breastfeeding, but an alternate drug may be preferred. Monitor the breast-fed infant for possible adverse effects on the gastrointestinal flora, such as diarrhea, candidiasis (thrush, diaper rash) or rarely, blood in the stool indicating possible antibiotic-associated colitis.

The developmental and health benefits of breastfeeding should be considered along with the mother's clinical need for clindamycin and any potential adverse effects on the breast-fed child from clindamycin or from the underlying maternal condition.

Clinical studies of CLEOCIN Vaginal Ovules did not include sufficient numbers of subjects aged 65 and over to determine whether they respond differently from younger subjects.

In clinical trials, 3 (0.5%) of 589 nonpregnant women who received treatment with CLEOCIN Vaginal Ovules discontinued therapy due to drug-related adverse events. Adverse events judged to have a reasonable possibility of having been caused by clindamycin phosphate vaginal suppositories were reported for 10.5% of patients. Events reported by 1% or more of patients receiving CLEOCIN Vaginal Ovules were as follows:

Other events reported by <1% of patients included:

The following adverse reactions and altered laboratory tests have been reported with the oral or parenteral use of clindamycin and may also occur following administration of CLEOCIN Vaginal Ovules:

Hematopoietic: Transient neutropenia (leukopenia), eosinophilia, agranulocytosis, and thrombocytopenia have been reported. No direct etiologic relationship to concurrent clindamycin therapy could be made in any of these reports.

Hypersensitivity Reactions: Maculopapular rash and urticaria have been observed during drug therapy. Generalized mild to moderate morbilliform-like skin rashes are the most frequently reported of all adverse reactions. Rare instances of erythema multiforme, some resembling Stevens-Johnson syndrome, have been associated with clindamycin. A few cases of anaphylactoid reactions have been reported. If a hypersensitivity reaction occurs, the drug should be discontinued.

Liver: Jaundice and abnormalities in liver function tests have been observed during clindamycin therapy.

Musculoskeletal: Rare instances of polyarthritis have been reported.

Renal: Although no direct relationship of clindamycin to renal damage has been established, renal dysfunction as evidenced by azotemia, oliguria, and/or proteinuria has been observed in rare instances.

There have been reports of pseudomembranous colitis following the administration of clindamycin vaginal cream.

Clindamycin phosphate is a water-soluble ester of the semisynthetic antibiotic produced by a 7(S)-chloro-substitution of the 7(R)-hydroxyl group of the parent antibiotic lincomycin. The chemical name for clindamycin phosphate is methyl 7-chloro-6,7,8-trideoxy-6-(1-methyl-trans-4-propyl-L-2-pyrrolidinecarboxamido)-1-thio-L-threo-α-D-galacto-octopyranoside 2-(dihydrogen phosphate). The monohydrate form has a molecular weight of 522.98, and the molecular formula is C18H34ClN2O8PS•H2O. The structural formula is represented below: 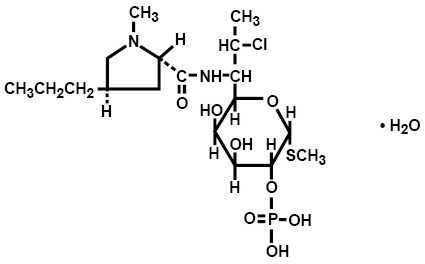 CLEOCIN Vaginal Ovules are semisolid, white to off-white suppositories for intravaginal administration. Each 2.5 g suppository contains clindamycin phosphate equivalent to 100 mg clindamycin in a base consisting of a mixture of glycerides of saturated fatty acids.

Systemic absorption of clindamycin was estimated following a once-a-day intravaginal dose of one clindamycin phosphate vaginal suppository (equivalent to 100 mg clindamycin) administered to 11 healthy female volunteers for 3 days. Approximately 30% (range 6% to 70%) of the administered dose was absorbed systemically on day 3 of dosing based on area under the concentration-time curve (AUC). Systemic absorption was estimated using a subtherapeutic 100 mg intravenous dose of clindamycin phosphate as a comparator in the same volunteers. The mean AUC following day 3 of dosing with the suppository was 3.2 µg hr/mL (range 0.42 to 11 µg hr/mL). The Cmax observed on day 3 of dosing with the suppository averaged 0.27 µg/mL (range 0.03 to 0.67 µg/mL) and was observed about 5 hours after dosing (range 1 to 10 hours). In contrast, the AUC and Cmax after the single intravenous dose averaged 11 µg hr/mL (range 5.1 to 26 µg hr/mL) and 3.7 µg/mL (range 2.4 to 5.0 µg/mL), respectively. The mean apparent elimination half-life after dosing with the suppository was 11 hours (range 4 to 35 hours) and is considered to be limited by the absorption rate.

How do I use CLEOCIN Vaginal Ovules?

For vaginal use only. Do not take by mouth.

Use one CLEOCIN Vaginal Ovule daily, preferably at bedtime, for 3 days in a row.

Do not use this product if the foiled pouches containing vaginal ovules are torn, opened, or incompletely sealed.

Read the full directions below before using.

Insertion with the applicator:

1.
Remove the vaginal ovule from its packaging (See Figure 1). 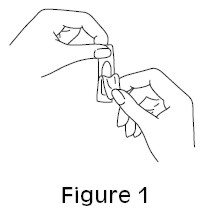 2.
Pull back the plunger about an inch and place the vaginal ovule in the wider end of the applicator barrel (See Figure 2). 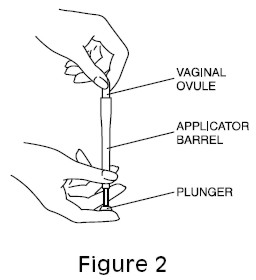 5.
Clean the applicator after each use. Pull the two pieces apart and wash them with soap and warm water. Rinse well and dry. Put the two pieces back together and store in a clean, dry place.

6.
Once inside the vagina, the ovule melts. Lie down as soon as possible. This will keep leakage to a minimum.

Insertion without the applicator:

FOR INTRAVAGINAL USE ONLY

Clindamycin inhibits bacterial protein synthesis by binding to the 23S RNA of the 50S subunit of the ribosome. Clindamycin is predominantly bacteriostatic.

Although clindamycin phosphate is inactive in vitro, rapid in vivo hydrolysis converts it to active clindamycin.

Resistance to clindamycin is most often caused by modification of the target site on the ribosome, usually by chemical modification of RNA bases or by point mutations in RNA or occasionally in proteins. Cross resistance has been demonstrated between lincosamides, macrolides and streptogramins B in some organisms. Cross resistance has been demonstrated between clindamycin and lincomycin.

Culture and sensitivity testing of bacteria are not routinely performed to establish the diagnosis of bacterial vaginosis (see INDICATIONS AND USAGE); standard methodology for the susceptibility testing of the potential bacterial pathogens, Gardnerella vaginalis, Mobiluncus spp., or Mycoplasma hominis, has not been defined.

The following in vitro data are available but their clinical significance is unknown. Clindamycin is active in vitro against most isolates of the following organisms reported to be associated with bacterial vaginosis:

This product's label may have been updated. For current full prescribing information, please visit www.pfizer.com.

Need to report an Adverse Event, Side Effect or Product Quality Concern?

Contact Pfizer Safety to report an adverse event, side effect or concern about the quality of a Pfizer product: (800) 438-1985

You may also contact the U.S. Food and Drug Administration (FDA) directly to report adverse events or product quality concerns at 1-800-FDA-1088 or www.fda.gov/MedWatch

Have a Medical Question on a Pfizer Prescription Medicine?
Contact Pfizer Medical Information to speak with a professional regarding your medical question on a Pfizer prescription product: (800) 438-1985
Have a Question about Pfizer Clinical Trials?
If you are looking for information about Pfizer studies currently recruiting new patients in your area, you can begin your search on our website. For questions about a Pfizer Clinical Trial, call (800) 718-1021 or email [email protected]
Need Information on Pfizer’s Patient Assistance Programs?

Pfizer RxPathways® connects eligible patients, regardless of their insurance status, to a range of assistance programs that offer insurance support, co-pay help, and medicines for free or at a savings. For more information, please call (844) 989-7284 or visit www.PfizerRxPathways.com.