Cisatracurium besylate binds competitively to cholinergic receptors on the motor end-plate to antagonize the action of acetylcholine, resulting in blockade of neuromuscular transmission. This action is antagonized by acetylcholinesterase inhibitors such as neostigmine.

The pharmacodynamics of various cisatracurium doses administered over 5 to 10 seconds during opioid/nitrous oxide/oxygen anesthesia are summarized in Table 5. When the cisatracurium dose is doubled, the clinically effective duration of blockade increases by approximately 25 minutes. Once recovery begins, the rate of recovery is independent of dose.

Isoflurane or enflurane administered with nitrous oxide/oxygen to achieve 1.25 MAC (Minimum Alveolar Concentration) prolonged the clinically effective duration of action of initial and maintenance cisatracurium doses, and decreased the average infusion rate requirement of cisatracurium besylate. The magnitude of these effects depended on the duration of administration of the volatile agents:

A total of 141 patients undergoing coronary artery bypass graft (CABG) surgery were administered cisatracurium besylate in three active-controlled clinical trials and received doses ranging from 0.1 mg/kg to 0.4 mg/kg. While the hemodynamic profile was comparable in both the cisatracurium besylate and active control groups, data for doses above 0.3 mg/kg in this population are limited. 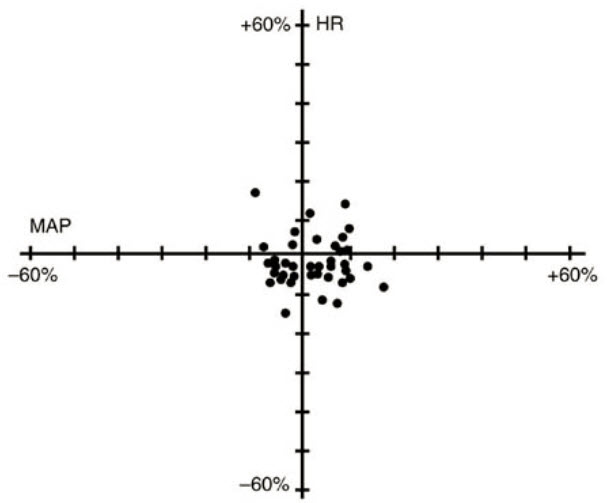 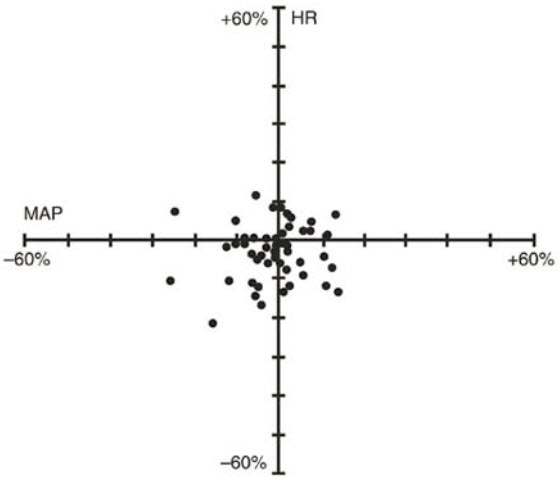 The neuromuscular blocking activity of cisatracurium besylate is due to parent drug. Cisatracurium plasma concentration-time data following IV bolus administration are best described by a two-compartment open model (with elimination from both compartments) with an elimination half-life (t½β) of 22 minutes, a plasma clearance (CL) of 4.57 mL/min/kg, and a volume of distribution at steady state (Vss) of 145 mL/kg.

The magnitude of interpatient variability in CL was low (16%), as expected based on the importance of Hofmann elimination. The magnitudes of interpatient variability in CL and volume of distribution were low in comparison to those for keo and EC50. This suggests that any alterations in the time course of cisatracurium besylate-induced neuromuscular blockade were more likely to be due to variability in the PD parameters than in the PK parameters. Parameter estimates from the population PK analyses were supported by noncompartmental PK analyses on data from healthy patients and from specific populations.

The binding of cisatracurium to plasma proteins has not been successfully studied due to its rapid degradation at physiologic pH. Inhibition of degradation requires nonphysiological conditions of temperature and pH which are associated with changes in protein binding.

The mean CL values for cisatracurium ranged from 4.5 to 5.7 mL/min/kg in studies of healthy surgical patients. The compartmental PK modeling suggests that approximately 80% of the cisatracurium CL is accounted for by Hofmann elimination and the remaining 20% by renal and hepatic elimination. These findings are consistent with the low magnitude of interpatient variability in CL (16%) estimated as part of the population PK/PD analyses and with the recovery of parent and metabolites in urine.

The degradation of cisatracurium was largely independent of liver metabolism. Results from in vitro experiments suggest that cisatracurium undergoes Hofmann elimination (a pH and temperature-dependent chemical process) to form laudanosine [see Warnings and Precautions (5.3)] and the monoquaternary acrylate metabolite, neither of which has any neuromuscular blocking activity. The monoquaternary acrylate undergoes hydrolysis by non-specific plasma esterases to form the monoquaternary alcohol (MQA) metabolite. The MQA metabolite can also undergo Hofmann elimination but at a much slower rate than cisatracurium. Laudanosine is further metabolized to desmethyl metabolites which are conjugated with glucuronic acid and excreted in the urine.

The laudanosine metabolite of cisatracurium has been noted to cause transient hypotension and, in higher doses, cerebral excitatory effects when administered to several animal species. The relationship between CNS excitation and laudanosine concentrations in humans has not been established [see Warnings and Precautions (5.3)].

The t½β values of metabolites are longer in patients with hepatic disease and concentrations may be higher after long-term administration.

The t½β values of metabolites are longer in patients with ESRD and concentrations may be higher after long-term administration.

The PK of cisatracurium and its metabolites were determined in six ICU patients who received cisatracurium besylate and are presented in Table 10. The relationships between plasma cisatracurium concentrations and neuromuscular blockade have not been evaluated in ICU patients.

Although population PK/PD analyses revealed that sex and obesity were associated with effects on the PK and/or PD of cisatracurium; these PK/PD changes were not associated with clinically significant alterations in the predicted onset or recovery profile of Cisatracurium Besylate Injection.

Use of Inhalation Agents:

The use of inhalation agents was associated with a 21% larger Vss, a 78% larger keo, and a 15% lower EC50 for cisatracurium. These changes resulted in a slightly faster (~ 45 seconds) predicted time to 90% T1 suppression in patients who received 0.1 mg/kg cisatracurium during inhalation anesthesia than in patients who received the same dose of cisatracurium during opioid anesthesia; however, there were no clinically significant differences in the predicted recovery profile of Cisatracurium Besylate Injection between patient groups.

The systemic clearance of cisatracurium was higher in patients who were on prior chronic anticonvulsant therapy of carbamazepine or phenytoin [see Warning and Precautions (5.9) and Drug Interactions (7.1)].