Fosphenytoin is a prodrug of phenytoin and accordingly, its anticonvulsant effects are attributable to phenytoin. The precise mechanism by which phenytoin exerts its therapeutic effect has not been established but is thought to involve the voltage-dependent blockade of membrane sodium channels resulting in a reduction in sustained high-frequency neuronal discharges.

Intravenous: When CEREBYX is administered by IV infusion, maximum plasma fosphenytoin concentrations are achieved at the end of the infusion.

Fosphenytoin is extensively bound (95% to 99%) to human plasma proteins, primarily albumin. Binding to plasma proteins is saturable with the result that the percent bound decreases as total fosphenytoin concentrations increase. Fosphenytoin displaces phenytoin from protein binding sites. The volume of distribution of fosphenytoin increases with CEREBYX dose and rate, and ranges from 4.3 to 10.8 liters.

The conversion half-life of fosphenytoin to phenytoin is approximately 15 minutes.

Following parenteral administration of CEREBYX, fosphenytoin is converted to the anticonvulsant phenytoin. The mechanism of fosphenytoin conversion has not been determined, but phosphatases probably play a major role. Fosphenytoin is metabolized to phenytoin, phosphate, and formate. For every mmol of fosphenytoin administered, one mmol of phenytoin is produced. The hydrolysis of fosphenytoin to phenytoin yields two metabolites, phosphate and formaldehyde. Formaldehyde is subsequently converted to formate, which is in turn metabolized via a folate dependent mechanism. Although phosphate and formaldehyde (formate) have potentially important biological effects, these effects typically occur at concentrations considerably in excess of those obtained when CEREBYX is administered under conditions of use recommended in this labeling.

Fosphenytoin is not excreted in urine.

In general, IM administration of CEREBYX generates systemic phenytoin concentrations that are similar enough to oral phenytoin sodium to allow essentially interchangeable use. The pharmacokinetics of fosphenytoin following IV administration of CEREBYX, however, are complex, and when used in an emergency setting (e.g., status epilepticus), differences in rate of availability of phenytoin could be critical. Studies have therefore empirically determined an infusion rate for CEREBYX that gives a rate and extent of phenytoin systemic availability similar to that of a 50 mg/min phenytoin sodium infusion. A dose of 15 to 20 mg PE/kg of CEREBYX infused at 100 to 150 mg PE/min yields plasma free phenytoin concentrations over time that approximate those achieved when an equivalent dose of phenytoin sodium (e.g., parenteral DILANTIN®) is administered at 50 mg/min [see Dosage and Administration (2.3) and Warnings and Precautions (5.2)]. 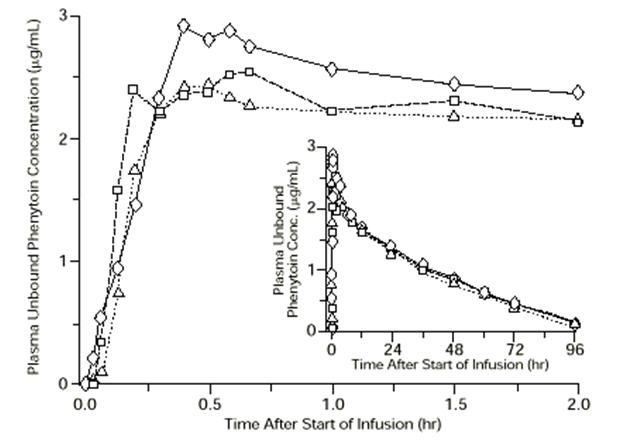 Mean total phenytoin half-life values (12.0 to 28.9 hr) following CEREBYX administration at these doses are similar to those after equal doses of parenteral Dilantin and tend to be greater at higher plasma phenytoin concentrations.

Phenytoin derived from administration of CEREBYX is extensively metabolized in the liver by the cytochrome P450 enzyme CYP2C9 and to a lesser extent by CYP2C19. Phenytoin hepatic metabolism is saturable, and following administration of single IV CEREBYX doses of 400 to 1200 mg PE, total and unbound phenytoin AUC values increase disproportionately with dose.

Phenytoin derived from administration of CEREBYX is excreted in urine primarily as 5-(p-hydroxyphenyl)-5-phenylhydantoin and its glucuronide; little unchanged phenytoin (1% to 5% of the CEREBYX dose) is recovered in urine.

Gender and race have no significant impact on fosphenytoin or phenytoin pharmacokinetics.

Increased fraction of unbound phenytoin (the active metabolite of CEREBYX) in patients with renal or hepatic disease, or in those with hypoalbuminemia has been reported.

It has been reported in the literature that the plasma clearance of phenytoin (the active metabolite of CEREBYX) generally increased during pregnancy, reached a peak in the third trimester and returned to the level of pre-pregnancy after few weeks or months of delivery [see Dosage and Administration (2.9)].

Phenytoin derived from administration of CEREBYX is extensively metabolized in the liver by the cytochrome P450 enzyme CYP2C9 and to a lesser extent by CYP2C19 [see Drug Interactions (7.1, 7.2)]. No drugs are known to interfere with the conversion of fosphenytoin to phenytoin. Conversion could be affected by alterations in the level of phosphatase activity, but given the abundance and wide distribution of phosphatases in the body it is unlikely that drugs would affect this activity enough to affect conversion of fosphenytoin to phenytoin.

The pharmacokinetics and protein binding of fosphenytoin, phenytoin, and diazepam were not altered when diazepam and CEREBYX were concurrently administered in single submaximal doses.