A prospective, international, randomized (1:1), open-label clinical study (NCT00111319) of 682 patients was conducted to determine whether bortezomib administered intravenously (1.3 mg/m2) in combination with melphalan (9 mg/m2) and prednisone (60 mg/m2) resulted in improvement in time to progression (TTP) when compared to melphalan (9 mg/m2) and prednisone (60 mg/m2) in patients with previously untreated multiple myeloma. Treatment was administered for a maximum of nine cycles (approximately 54 weeks) and was discontinued early for disease progression or unacceptable toxicity. Antiviral prophylaxis was recommended for patients on the bortezomib study arm. 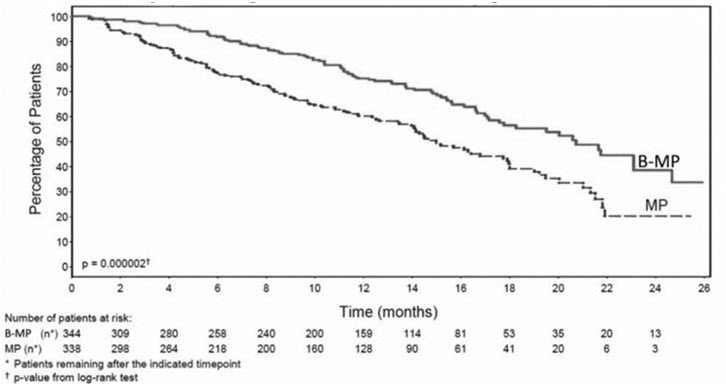 A prospective Phase 3, international, randomized (1:1), stratified, open-label clinical study (NCT00048230) enrolling 669 patients was designed to determine whether bortezomib resulted in improvement in time to progression (TTP) compared to high-dose dexamethasone in patients with progressive multiple myeloma following 1 to 3 prior therapies. Patients considered to be refractory to prior high-dose dexamethasone were excluded as were those with baseline Grade ≥2 peripheral neuropathy or platelet counts <50,000/μL. A total of 627 patients were evaluable for response.

Stratification factors were based on the number of lines of prior therapy the patient had previously received (one previous line vs more than one line of therapy), time of progression relative to prior treatment (progression during or within six months of stopping their most recent therapy vs relapse >6 months after receiving their most recent therapy), and screening beta2-microglobulin levels (≤2.5 mg/L vs >2.5 mg/L).

Baseline patient and disease characteristics are summarized in Table 15.

The time to event analyses and response rates from the relapsed multiple myeloma study are presented in Table 16. Response and progression were assessed using the European Group for Blood and Marrow Transplantation (EBMT) criteria. Complete response (CR) required <5% plasma cells in the marrow, 100% reduction in M-protein, and a negative immunofixation test (IF-). Partial response (PR) requires ≥50% reduction in serum myeloma protein and ≥90% reduction of urine myeloma protein on at least two occasions for a minimum of at least six weeks along with stable bone disease and normal calcium. Near complete response (nCR) was defined as meeting all the criteria for complete response including 100% reduction in M-protein by protein electrophoresis; however, M-protein was still detectable by immunofixation (IF+). 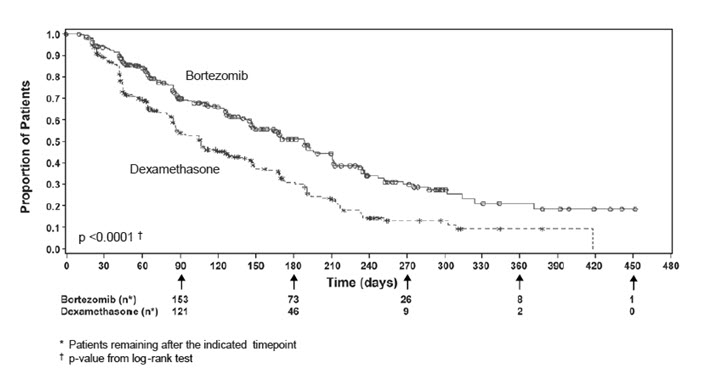 As shown in Figure 4, bortezomib had a significant survival advantage relative to dexamethasone (p < 0.05). The median follow-up was 8.3 months. 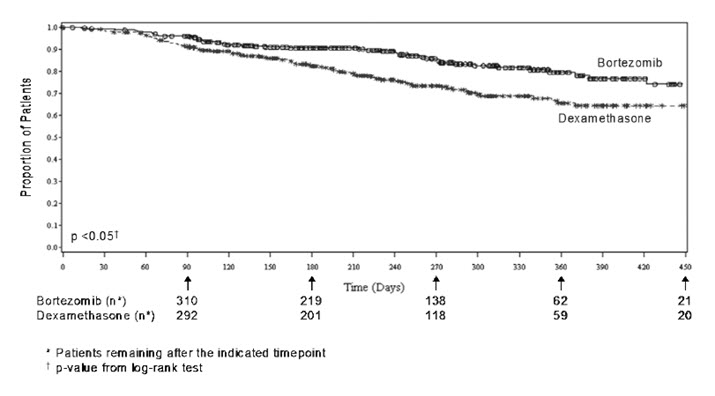 For the 121 patients achieving a response (CR or PR) on the bortezomib arm, the median duration was 8.0 months (95% CI: 6.9, 11.5 months) compared to 5.6 months (95% CI: 4.8, 9.2 months) for the 56 responders on the dexamethasone arm. The response rate was significantly higher on the bortezomib arm regardless of beta2-microglobulin levels at baseline.

An open-label, randomized, Phase 3 non-inferiority study (NCT00722566) compared the efficacy and safety of the subcutaneous administration of bortezomib vs the intravenous administration. This study included 222 bortezomib naïve patients with relapsed multiple myeloma, who were randomized in a 2:1 ratio to receive 1.3 mg/m2 of bortezomib by either the subcutaneous (n=148) or intravenous (n=74) route for eight cycles. Patients who did not obtain an optimal response (less than Complete Response (CR)) to therapy with bortezomib alone after four cycles were allowed to receive oral dexamethasone 20 mg daily on the day of and after bortezomib administration (82 patients in subcutaneous treatment group and 39 patients in the intravenous treatment group). Patients with baseline Grade ≥2 peripheral neuropathy or neuropathic pain, or platelet counts <50,000/μL were excluded. A total of 218 patients were evaluable for response.

Stratification factors were based on the number of lines of prior therapy the patient had received (one previous line vs more than one line of therapy), and international staging system (ISS) stage (incorporating beta2-microglobulin and albumin levels; Stages I, II, or III).

This study met its primary (non-inferiority) objective that single agent subcutaneous bortezomib retains at least 60% of the overall response rate after four cycles relative to single agent intravenous bortezomib. The results are provided in Table 17.

An open-label, multicenter study randomized 54 patients with multiple myeloma who had progressed or relapsed on or after front-line therapy to receive bortezomib 1 mg/m2 or 1.3 mg/m2 intravenous bolus twice weekly for two weeks on Days 1, 4, 8, and 11 followed by a ten day rest period (Days 12 to 21). The median duration of time between diagnosis of multiple myeloma and first dose of bortezomib on this trial was two years, and patients had received a median of one prior line of treatment (median of three prior therapies). A single complete response was seen at each dose. The overall response rates (CR + PR) were 30% (8/27) at 1 mg/m2 and 38% (10/26) at 1.3 mg/m2.

Patients from the two Phase 2 studies, who in the investigators' opinion would experience additional clinical benefit, continued to receive bortezomib beyond 8 cycles on an extension study. Sixty-three (63) patients from the Phase 2 multiple myeloma studies were enrolled and received a median of seven additional cycles of bortezomib therapy for a total median of 14 cycles (range: 7 to 32). The overall median dosing intensity was the same in both the parent protocol and extension study. Sixty-seven percent (67%) of patients initiated the extension study at the same or higher dose intensity at which they completed the parent protocol, and 89% of patients maintained the standard three week dosing schedule during the extension study. No new cumulative or new long-term toxicities were observed with prolonged bortezomib treatment [see Adverse Reactions (6.1)].

A Single-Arm Trial of Retreatment in Relapsed Multiple Myeloma

A single-arm, open-label trial (NCT00431769) was conducted to determine the efficacy and safety of retreatment with bortezomib. One hundred and thirty patients (≥18 years of age) with multiple myeloma who previously had at least partial response on a bortezomib-containing regimen (median of two prior lines of therapy ) were retreated upon progression with bortezomib administered intravenously. Patients were excluded from trial participation if they had peripheral neuropathy or neuropathic pain of Grade ≥2. At least six months after prior bortezomib therapy, bortezomib was restarted at the last tolerated dose of 1.3 mg/m2 (n=93) or ≤1 mg/m2 (n=37) and given on Days 1, 4, 8 and 11 every three weeks for maximum of eight cycles either as single agent or in combination with dexamethasone in accordance with the standard of care. Dexamethasone was administered in combination with bortezomib to 83 patients in Cycle 1 with an additional 11 patients receiving dexamethasone during the course of bortezomib retreatment cycles.

The primary endpoint was best confirmed response to retreatment as assessed by European Group for Blood and Marrow Transplantation (EBMT) criteria. Fifty of the 130 patients achieved a best confirmed response of Partial Response or better for an overall response rate of 38.5% (95% CI: 30.1, 47.4). One patient achieved a Complete Response and 49 achieved Partial Response. In the 50 responding patients, the median duration of response was 6.5 months and the range was 0.6 to 19.3 months.

A randomized, open-label, Phase 3 study (NCT00722137) was conducted in 487 adult patients with previously untreated mantle cell lymphoma (Stage II, III or IV) who were ineligible or not considered for bone marrow transplantation to determine whether bortezomib administered in combination with rituximab, cyclophosphamide, doxorubicin, and prednisone (VcR-CAP) resulted in improvement in progression-free survival (PFS) when compared to the combination of rituximab, cyclophosphamide, doxorubicin, vincristine, and prednisone (R-CHOP). This clinical study utilized independent pathology confirmation and independent radiologic response assessment.

The efficacy results for PFS, CR and ORR with a median follow-up of 40 months are presented in Table 18. The response criteria used to assess efficacy were based on the International Workshop to Standardize Response Criteria for Non-Hodgkin's Lymphoma (IWRC). Final overall survival results at a median follow-up of 78.5 months are also presented in Table 18 and Figure 6. The combination of VcR-CAP resulted in statistically significant prolongation of PFS compared with R-CHOP (see Table 18, Figure 5). 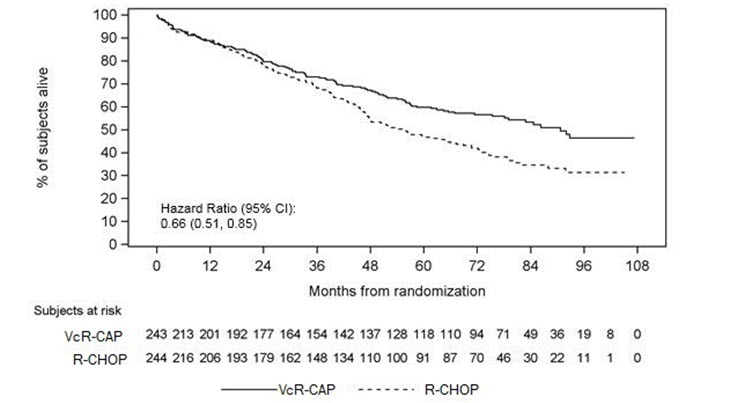 The safety and efficacy of bortezomib in relapsed or refractory mantle cell lymphoma were evaluated in an open-label, single-arm, multicenter study (NCT00063713) of 155 patients with progressive disease who had received at least one prior therapy. The median age of the patients was 65 years (42, 89), 81% were male, and 92% were Caucasian. Of the total, 75% had one or more extra-nodal sites of disease, and 77% were Stage 4. In 91% of the patients, prior therapy included all of the following: an anthracycline or mitoxantrone, cyclophosphamide, and rituximab. A total of thirty-seven percent (37%) of patients were refractory to their last prior therapy. An intravenous bolus injection of bortezomib 1.3 mg/m2/dose was administered twice weekly for two weeks on Days 1, 4, 8, and 11 followed by a ten day rest period (Days 12 to 21) for a maximum of 17 treatment cycles. Patients achieving a CR or CRu were treated for four cycles beyond first evidence of CR or CRu. The study employed dose modifications for toxicity [see Dosage and Administration (2.6, 2.7)].

Responses to bortezomib are shown in Table 19. Response rates to bortezomib were determined according to the International Workshop Response Criteria (IWRC) based on independent radiologic review of CT scans. The median number of cycles administered across all patients was four; in responding patients the median number of cycles was eight. The median time to response was 40 days (range: 31 to 204 days). The median duration of follow-up was more than 13 months.