Patients With Relapsed or Refractory ALL – INO-VATE ALL

The safety and efficacy of BESPONSA were evaluated in INO-VATE ALL (NCT01564784) a randomized (1:1), open-label, international, multicenter study in patients with relapsed or refractory ALL. Patients were stratified at randomization based on duration of first remission (< 12 months or ≥ 12 months, salvage treatment (Salvage 1 or 2) and patient age at randomization (< 55 or ≥ 55 years). Eligible patients were ≥ 18 years of age with Philadelphia chromosome-negative or Philadelphia chromosome-positive relapsed or refractory B-cell precursor ALL. All patients were required to have ≥ 5% bone marrow blasts and to have received 1 or 2 previous induction chemotherapy regimens for ALL. Patients with Philadelphia chromosome-positive B-cell precursor ALL were required to have disease that failed treatment with at least 1 tyrosine kinase inhibitor and standard chemotherapy. Table 1 shows the dosing regimen used to treat patients.

Among all 326 patients who were randomized to receive BESPONSA (N=164) or Investigator's choice of chemotherapy (N=162), 215 patients (66%) had received 1 prior treatment regimen for ALL and 108 patients (33%) had received 2 prior treatment regimens for ALL. The median age was 47 years (range: 18–79 years), 276 patients (85%) had Philadelphia chromosome-negative ALL, 206 patients (63%) had a duration of first remission < 12 months, and 55 patients (17%) had undergone a HSCT prior to receiving BESPONSA or Investigator's choice of chemotherapy. The two treatment groups were generally balanced with respect to the baseline demographics and disease characteristics.

All evaluable patients had B-cell precursor ALL that expressed CD22, with ≥ 90% of evaluable patients exhibiting ≥ 70% leukemic blast CD22 positivity prior to treatment, as assessed by flow cytometry performed at a central laboratory.

The efficacy of BESPONSA was established on the basis of CR, the duration of CR, and proportion of MRD-negative CR (< 1 × 10-4 of bone marrow nucleated cells by flow cytometry) in the first 218 patients randomized. CR, duration of remission (DoR), and MRD results in the initial 218 randomized patients were consistent with those seen in all 326 randomized patients.

Table 8 shows the efficacy results from this study.

Figure 1 shows the analysis of overall survival (OS). The analysis of OS did not meet the pre-specified boundary for statistical significance. 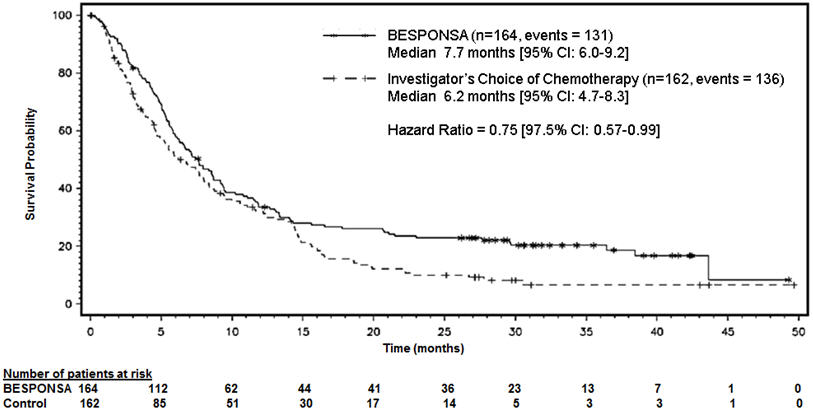