In these studies, 568 adult patients were treated with argatroban and 193 adult patients made up the historical control group. Patients had a clinical diagnosis of heparin-induced thrombocytopenia, either without thrombosis (HIT) or with thrombosis (HITTS [heparin-induced thrombocytopenia and thrombosis syndrome]) and were males or non-pregnant females between the age of 18 and 80 years old. HIT/HITTS was defined by a fall in platelet count to less than 100,000/µL or a 50% decrease in platelets after the initiation of heparin therapy with no apparent explanation other than HIT. Patients with HITTS also had an arterial or venous thrombosis documented by appropriate imaging techniques or supported by clinical evidence such as acute myocardial infarction, stroke, pulmonary embolism, or other clinical indications of vascular occlusion. Patients who had documented histories of positive heparin-dependent antibody tests without current thrombocytopenia or heparin challenge (e.g., patients with latent disease) were also included if they required anticoagulation.

The initial dose of argatroban was 2 mcg/kg/min. Two hours after the start of the argatroban infusion, an aPTT level was obtained and dose adjustments were made (up to a maximum of 10 mcg/kg/min) to achieve a steady-state aPTT value that was 1.5 to 3.0 times the baseline value, not to exceed 100 seconds. Overall the mean aPTT level for HIT and HITTS patients during the argatroban infusion increased from baseline values of 34 and 38 seconds, respectively, to 62.5 and 64.5 seconds, respectively.

The primary efficacy analysis was based on a comparison of event rates for a composite endpoint that included death (all causes), amputation (all causes) or new thrombosis during the treatment and follow-up period (study days 0 to 37). Secondary analyses included evaluation of the event rates for the components of the composite endpoint as well as time-to-event analyses.

There was a significant improvement in the composite outcome in patients with HIT and HITTS treated with argatroban versus those in the historical control group (see Table 9). The components of the composite endpoint are shown in Table 9.

Time-to-event analyses showed significant improvements in the time-to-first event in patients with HIT or HITTS treated with argatroban versus those in the historical control group. The between-group differences in the proportion of patients who remained free of death, amputation, or new thrombosis were statistically significant in favor of argatroban by these analyses. 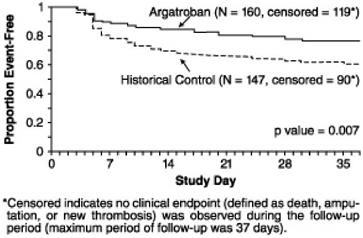 In Study 2, a total of 264 patients were enrolled as follows: HIT (n=125) or HITTS (n=139). There was a significant improvement in the composite efficacy outcome for argatroban-treated patients, versus the same historical control group from Study 1, among patients having HIT (25.6% vs. 38.8%), patients having HITTS (41.0% vs. 56.5%), and patients having either HIT or HITTS (33.7% vs. 43.0%). Time-to event analyses showed significant improvements in the time-to-first event in patients with HIT or HITTS treated with argatroban versus those in the historical control group. The between-group differences in the proportion of patients who remained free of death, amputation, or new thrombosis were statistically significant in favor of argatroban.

In Study 1, the mean (± SE) dose of argatroban administered was 2.0 ± 0.1 mcg/kg/min in the HIT arm and 1.9 ± 0.1 mcg/kg/min in the HITTS arm. Seventy-six percent of patients with HIT and 81% of patients with HITTS achieved a target aPTT at least 1.5-fold greater than the baseline aPTT at the first assessment occurring on average at 4.6 hours (HIT) and 3.9 hours (HITTS) following initiation of argatroban therapy.

No enhancement of aPTT response was observed in subjects receiving repeated administration of argatroban.

14.2 Percutaneous Coronary Intervention (PCI) Patients with or at Risk for HIT

In 3 similarly designed trials, argatroban was administered to 91 patients with current or previous clinical diagnosis of HIT or heparin-dependent antibodies, who underwent a total of 112 percutaneous coronary interventions (PCIs) including percutaneous transluminal coronary angioplasty (PTCA), coronary stent placement, or atherectomy. Among the 91 patients undergoing their first PCI with argatroban, notable ongoing or recent medical history included myocardial infarction (n = 35), unstable angina (n = 23), and chronic angina (n = 34). There were 33 females and 58 males. The average age was 67.6 years (median 70.7, range 44 to 86), and the average weight was 82.5 kg (median 81.0 kg, range 49 to 141).

Twenty-one of the 91 patients had a repeat PCI using argatroban an average of 150 days after their initial PCI. Seven of 91 patients received glycoprotein IIb/IIIa inhibitors. Safety and efficacy were assessed against historical control populations who had been anticoagulated with heparin.

All patients received oral aspirin (325 mg) 2 to 24 hours prior to the interventional procedure. After venous or arterial sheaths were in place, anticoagulation was initiated with a bolus of argatroban of 350 mcg/kg via a large-bore intravenous line or through the venous sheath over 3 to 5 minutes. Simultaneously, a maintenance infusion of 25 mcg/kg/min was initiated to achieve a therapeutic activated clotting time (ACT) of 300 to 450 seconds. If necessary to achieve this therapeutic range, the maintenance infusion dose was titrated (15 to 40 mcg/kg/min) and/or an additional bolus dose of 150 mcg/kg could be given. Each patient's ACT was checked 5 to 10 minutes following the bolus dose. The ACT was checked as clinically indicated. Arterial and venous sheaths were removed no sooner than 2 hours after discontinuation of argatroban and when the ACT was less than 160 seconds.

If a patient required anticoagulation after the procedure, argatroban could be continued, but at a lower infusion dose between 2.5 and 5 mcg/kg/min. An aPTT was drawn 2 hours after this dose reduction and the dose of argatroban then was adjusted as clinically indicated (not to exceed 10 mcg/kg/min), to reach an aPTT between 1.5 and 3 times baseline value (not to exceed 100 seconds).

In 92 of the 112 interventions (82%), the patient received the initial bolus of 350 mcg/kg and an initial infusion dose of 25 mcg/kg/min. The majority of patients did not require additional bolus dosing during the PCI procedure. The mean value for the initial ACT measurement after the start of dosing for all interventions was 379 sec (median 338 sec; 5th percentile-95th percentile 238 to 675 sec). The mean ACT value per intervention over all measurements taken during the procedure was 416 sec (median 390 sec; 5th percentile-95th percentile 261 to 698 sec). About 65% of patients had ACTs within the recommended range of 300 to 450 seconds throughout the procedure. The investigators did not achieve anticoagulation within the recommended range in about 23% of patients. However, in this small sample, patients with ACTs below 300 seconds did not have more coronary thrombotic events, and patients with ACTs over 450 seconds did not have higher bleeding rates.

Acute procedural success was defined as lack of death, emergent coronary artery bypass graft (CABG), or Q- wave myocardial infarction. Acute procedural success was reported in 98.2% of patients who underwent PCIs with argatroban anticoagulation compared with 94.3% of historical control patients anticoagulated with heparin (p = NS). Among the 112 interventions, 2 patients had emergency CABGs, 3 had repeat PTCAs, 4 had non-Q wave myocardial infarctions, 3 had myocardial ischemia, 1 had an abrupt closure, and 1 had an impending closure (some patients may have experienced more than 1 event). No patients died.