Argatroban is a direct thrombin inhibitor that reversibly binds to the thrombin active site. Argatroban does not require the co-factor antithrombin III for antithrombotic activity. Argatroban exerts its anticoagulant effects by inhibiting thrombin-catalyzed or -induced reactions, including fibrin formation; activation of coagulation factors V, VIII, and XIII; activation of protein C; and platelet aggregation.

Argatroban inhibits thrombin with an inhibition constant (Ki) of 0.04 µM. At therapeutic concentrations, argatroban has little or no effect on related serine proteases (trypsin, factor Xa, plasmin, and kallikrein).

Argatroban is capable of inhibiting the action of both free and clot-associated thrombin. 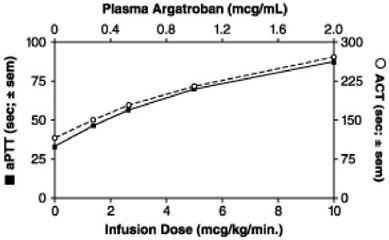 Effect on International Normalized Ratio (INR): Because argatroban is a direct thrombin inhibitor, co-administration of argatroban and warfarin produces a combined effect on the laboratory measurement of the INR. However, concurrent therapy, compared to warfarin monotherapy, exerts no additional effect on vitamin K–dependent factor Xa activity.

The relationship between INR on co-therapy and warfarin alone is dependent on both the dose of argatroban and the thromboplastin reagent used. This relationship is influenced by the International Sensitivity Index (ISI) of the thromboplastin. Data for 2 commonly utilized thromboplastins with ISI values of 0.88 (Innovin, Dade) and 1.78 (Thromboplastin C Plus, Dade) are presented in Figure 2 for an argatroban dose of 2 mcg/kg/min. Thromboplastins with higher ISI values than shown result in higher INRs on combined therapy of warfarin and argatroban. These data are based on results obtained in normal individuals [see Drug Interactions (7.2), Dosage and Administration (2.5)].

Figure 2.
INR Relationship of Argatroban Plus Warfarin Versus Warfarin Alone 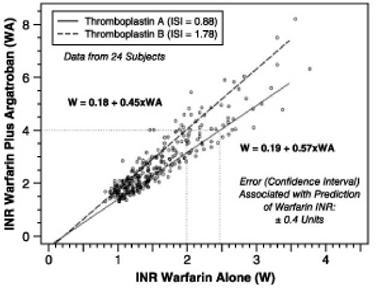 Argatroban distributes mainly in the extra cellular fluid as evidenced by an apparent steady-state volume of distribution of 174 mL/kg (12.18 L in a 70 kg adult). Argatroban is 54% bound to human serum proteins, with binding to albumin and α1-acid glycoprotein being 20% and 34%, respectively.

The main route of argatroban metabolism is hydroxylation and aromatization of the 3-methyltetrahydroquinoline ring in the liver. The formation of each of the 4 known metabolites is catalyzed in vitro by the human liver microsomal cytochrome P450 enzymes CYP3A4/5. The primary metabolite (M1) exerts 3- to 5-fold weaker anticoagulant effects than argatroban. Unchanged argatroban is the major component in plasma. The plasma concentrations of M1 range between 0% and 20% of that of the parent drug. The other metabolites (M2 to M4) are found only in very low quantities in the urine and have not been detected in plasma or feces. These data, together with the lack of effect of erythromycin (a potent CYP3A4/5 inhibitor) on argatroban pharmacokinetics, suggest that CYP3A4/5-mediated metabolism is not an important elimination pathway in vivo.

Total body clearance is approximately 5.1 mL/kg/min (0.31 L/kg/hr) for infusion doses up to 40 mcg/kg/min. The terminal elimination half-life of argatroban ranges between 39 and 51 minutes.

There is no interconversion of the 21–(R):21–(S) diastereoisomers. The plasma ratio of these diastereoisomers is unchanged by metabolism or hepatic impairment, remaining constant at 65:35 (± 2%).

Argatroban is excreted primarily in the feces, presumably through biliary secretion. In a study in which 14C- argatroban (5 mcg/kg/min) was infused for 4 hours into healthy subjects, approximately 65% of the radioactivity was recovered in the feces within 6 days of the start of infusion with little or no radioactivity subsequently detected. Approximately 22% of the radioactivity appeared in the urine within 12 hours of the start of infusion. Little or no additional urinary radioactivity was subsequently detected. Average percent recovery of unchanged drug, relative to total dose, was 16% in urine and at least 14% in feces.

Use of argatroban was evaluated in a study of 12 patients with stable end-stage renal disease undergoing chronic intermittent hemodialysis. Argatroban was administered at a rate of 2 to 3 mcg/kg/min (begun at least 4 hours prior to dialysis) or as a bolus dose of 250 mcg/kg at the start of dialysis followed by a continuous infusion of 2 mcg/kg/min. Although these regimens did not achieve the goal of maintaining ACT values at 1.8 times the baseline value throughout most of the hemodialysis period, the hemodialysis sessions were successfully completed with both of these regimens. The mean ACTs produced in this study ranged from 1.39 to 1.82 times baseline, and the mean aPTTs ranged from 1.96 to 3.4 times baseline. When argatroban was administered as a continuous infusion of 2 mcg/kg/min prior to and during a 4-hour hemodialysis session, approximately 20% was cleared through dialysis.

Age, Gender: There are no clinically significant effects of age or gender on the pharmacokinetics or pharmacodynamics (e.g., aPTT) of argatroban in adults.

Digoxin: In 12 healthy volunteers, intravenous infusion of argatroban (2 mcg/kg/min) over 5 days (study days 11 to 15) did not affect the steady-state pharmacokinetics of oral digoxin (0.375 mg daily for 15 days).

Erythromycin: In 10 healthy subjects, orally administered erythromycin (a potent inhibitor of CYP3A4/5) at 500 mg four times daily for 7 days had no effect on the pharmacokinetics of argatroban at a dose of 1 mcg/kg/min for 5 hours. These data suggest oxidative metabolism by CYP3A4/5 is not an important elimination pathway in vivo for argatroban.