Administration of ALTACE to patients with mild to moderate hypertension results in a reduction of both supine and standing blood pressure to about the same extent with no compensatory tachycardia. Symptomatic postural hypotension is infrequent, although it can occur in patients who are salt- and/or volume-depleted [see Warnings and Precautions (5.5)]. Use of ALTACE in combination with thiazide diuretics gives a blood pressure lowering effect greater than that seen with either agent alone.

In single-dose studies, doses of 5 mg–20 mg of ALTACE lowered blood pressure within 1–2 hours, with peak reductions achieved 3–6 hours after dosing. The antihypertensive effect of a single dose persisted for 24 hours. In longer term (4–12 weeks) controlled studies, once-daily doses of 2.5 mg–10 mg were similar in their effect, lowering supine or standing systolic and diastolic blood pressures 24 hours after dosing by about 6/4 mmHg more than placebo. In comparisons of peak vs. trough effect, the trough effect represented about 50–60% of the peak response. In a titration study comparing divided (bid) vs. qd treatment, the divided regimen was superior, indicating that for some patients, the antihypertensive effect with once-daily dosing is not adequately maintained.

In most trials, the antihypertensive effect of ALTACE increased during the first several weeks of repeated measurements. The antihypertensive effect of ALTACE has been shown to continue during long-term therapy for at least 2 years. Abrupt withdrawal of ALTACE has not resulted in a rapid increase in blood pressure. ALTACE has been compared with other ACE inhibitors, beta-blockers, and thiazide diuretics. ALTACE was approximately as effective as other ACE inhibitors and as atenolol. In both Caucasians and Blacks, hydrochlorothiazide (25 or 50 mg) was significantly more effective than ramipril.

ALTACE was less effective in blacks than in Caucasians. The effectiveness of ALTACE was not influenced by age, sex, or weight.

In a baseline controlled study of 10 patients with mild essential hypertension, blood pressure reduction was accompanied by a 15% increase in renal blood flow. In healthy volunteers, glomerular filtration rate was unchanged.

14.2 Reduction in Risk of Myocardial Infarction, Stroke, and Death from Cardiovascular Causes

The HOPE study was a large, multicenter, randomized, double-blind, placebo-controlled, 2 × 2 factorial design study conducted in 9541 patients (4645 on ALTACE) who were 55 years or older and considered at high risk of developing a major cardiovascular event because of a history of coronary artery disease, stroke, peripheral vascular disease, or diabetes that was accompanied by at least one other cardiovascular risk factor (hypertension, elevated total cholesterol levels, low HDL levels, cigarette smoking, or documented microalbuminuria). Patients were either normotensive or under treatment with other antihypertensive agents. Patients were excluded if they had clinical heart failure or were known to have a low ejection fraction (<0.40). This study was designed to examine the long-term (mean of 5 years) effects of ALTACE (10 mg orally once daily) on the combined endpoint of myocardial infarction, stroke, or death from cardiovascular causes.

The HOPE study results showed that ALTACE (10 mg/day) significantly reduced the rate of myocardial infarction, stroke, or death from cardiovascular causes (826/4652 vs. 651/4645, relative risk 0.78), as well as the rates of the 3 components of the combined endpoint. The relative risk of the composite outcomes in the ALTACE group as compared to the placebo group was 0.78% (95% confidence interval, 0.70–0.86). The effect was evident after about 1 year of treatment.

Figure 1. Kaplan-Meier Estimates of the Composite Outcome of Myocardial Infarction, Stroke, or Death from Cardiovascular Causes in the Ramipril Group and the Placebo Group 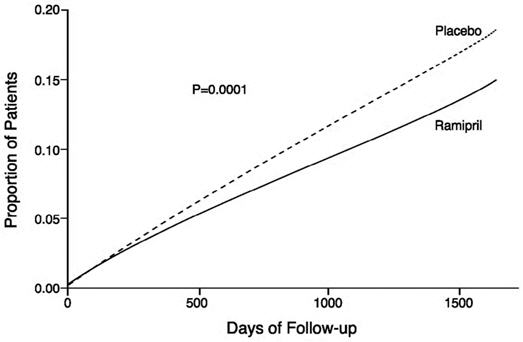 This study was designed with a prespecified substudy in diabetics with at least one other cardiovascular risk factor. Effects of ALTACE on the combined endpoint and its components were similar in diabetics (N=3577) to those in the overall study population.

Figure 2. The Beneficial Effect of Treatment with ALTACE on the Composite Outcome of Myocardial Infarction, Stroke, or Death from Cardiovascular Causes Overall and in Various Subgroups 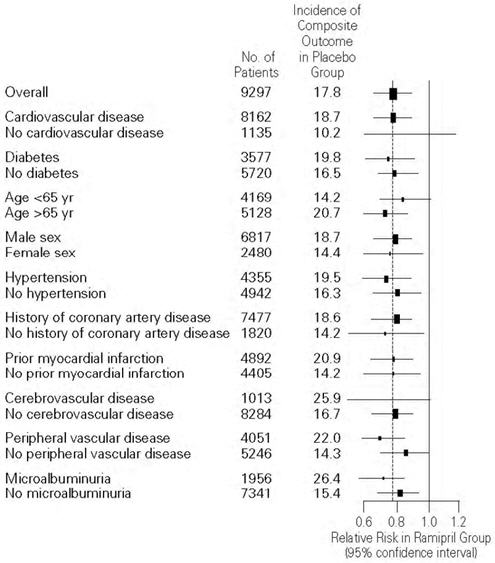 Cerebrovascular disease was defined as stroke or transient ischemic attacks. The size of each symbol is proportional to the number of patients in each group. The dashed line indicates overall relative risk.

The benefits of ALTACE were observed among patients who were taking aspirin or other anti-platelet agents, beta-blockers, and lipid-lowering agents as well as diuretics and calcium channel blockers.

ALTACE was studied in the AIRE trial. This was a multinational (mainly European) 161-center, 2006-patient, double-blind, randomized, parallel-group study comparing ALTACE to placebo in stable patients, 2–9 days after an acute myocardial infarction, who had shown clinical signs of congestive heart failure at any time after the myocardial infarction. Patients in severe (NYHA class IV) heart failure, patients with unstable angina, patients with heart failure of congenital or valvular etiology, and patients with contraindications to ACE inhibitors were all excluded. The majority of patients had received thrombolytic therapy at the time of the index infarction, and the average time between infarction and initiation of treatment was 5 days.

Patients randomized to ALTACE treatment were given an initial dose of 2.5 mg twice daily. If the initial regimen caused undue hypotension, the dose was reduced to 1.25 mg, but in either event doses were titrated upward (as tolerated) to a target regimen (achieved in 77% of patients randomized to ALTACE) of 5 mg twice daily. Patients were then followed for an average of 15 months, with the range of follow-up between 6 and 46 months.

The use of ALTACE was associated with a 27% reduction (p=0.002) in the risk of death from any cause; about 90% of the deaths that occurred were cardiovascular, mainly sudden death. The risks of progression to severe heart failure and of congestive heart failure-related hospitalization were also reduced, by 23% (p=0.017) and 26% (p=0.011), respectively. The benefits of ALTACE therapy were seen in both genders, and they were not affected by the exact timing of the initiation of therapy, but older patients may have had a greater benefit than those under 65. The benefits were seen in patients on (and not on) various concomitant medications. At the time of randomization these included aspirin (about 80% of patients), diuretics (about 60%), organic nitrates (about 55%), beta-blockers (about 20%), calcium channel blockers (about 15%), and digoxin (about 12%).