The Randomized Aldactone Evaluation Study (RALES) was a placebo controlled, double-blind study of the effect of spironolactone on mortality in patients with highly symptomatic heart failure and reduced ejection fraction. To be eligible to participate patients had to have an ejection fraction of ≤ 35%, NYHA class III–IV symptoms, and a history of NYHA class IV symptoms within the last 6 months before enrollment. Patients with a baseline serum creatinine of >2.5 mg/dL or a recent increase of 25% or with a baseline serum potassium of >5.0 mEq/L were excluded.

Follow-up visits and laboratory measurements (including serum potassium and creatinine) were performed every four weeks for the first 12 weeks, then every 3 months for the first year, and then every 6 months thereafter.

The initial dose of spironolactone was 25 mg once daily. Patients who were intolerant of the initial dosage regimen had their dose decreased to one 25 mg tablet every other day at one to four weeks. Patients who were tolerant of one tablet daily at 8 weeks may have had their dose increased to 50 mg daily at the discretion of the investigator. The mean daily dose at study end for patients randomized to spironolactone was 26 mg.

1663 patients were randomized 1:1 to spironolactone or placebo. 87% of patients were white, 7% black, 2% Asian. 73% were male and median age was 67. The median ejection fraction was 26%. 70% were NYHA class III and 29% class IV. The etiology of heart failure was ischemic in 55%, and non-ischemic in 45%. There was a history of myocardial infarction in 28%, of hypertension in 24%, and of diabetes in 22%. The median baseline serum creatinine was 1.2 mg/dL and the median baseline creatinine clearance was 57 mL/min.

At baseline 100% of patients were taking loop diuretic and 95% were taking an ACE inhibitor. Other medications used at any time during the study included digoxin (78%), anticoagulants (58%), aspirin (43%), and beta-blockers (15%).

The primary endpoint for RALES was time to all-cause mortality. RALES was terminated early because of significant mortality benefit demonstrated during a planned interim analysis. Compared to placebo, spironolactone reduced the risk of death by 30% (p<0.001; 95% confidence interval 18% to 40%). Spironolactone also reduced the risk of hospitalization for cardiac causes (defined as worsening heart failure, angina, ventricular arrhythmias, or myocardial infarction) by 30% (p <0.001; 95% confidence interval 18% to 41%).

The survival curves by treatment group are shown in Figure 1. 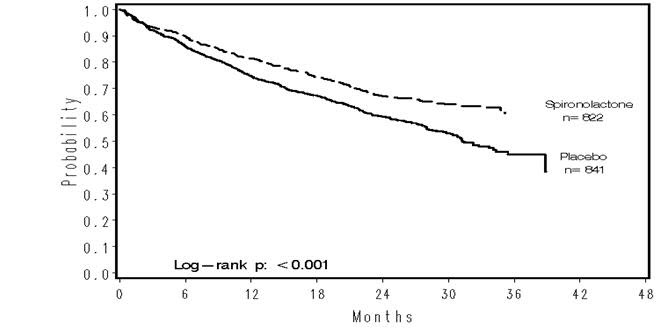 Mortality hazard ratios for some subgroups are shown in Figure 2. The favorable effect of spironolactone on mortality appeared similar for both genders and all age groups except patients younger than 55. There were too few non-whites in RALES to evaluate if the effects differ by race. Spironolactone's benefit appeared greater in patients with low baseline serum potassium levels and less in patients with ejection fractions <0.2. These subgroup analyses must be interpreted cautiously.

Figure 2. Hazard Ratios of All-Cause Mortality by Subgroup in RALES 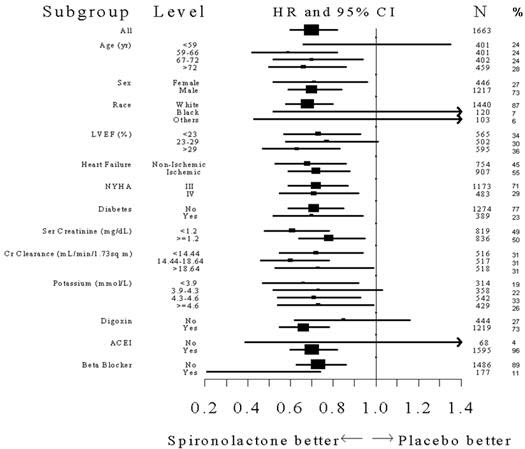 The dose response of spironolactone for hypertension has not been well characterized. In patients with hypertension, decreases in systolic blood pressure have been observed at doses ranging from 25 to 100 mg/day. Doses greater than 100 mg/day generally do not provide additional reductions in blood pressure [see Dosage and Administration (2.3)].